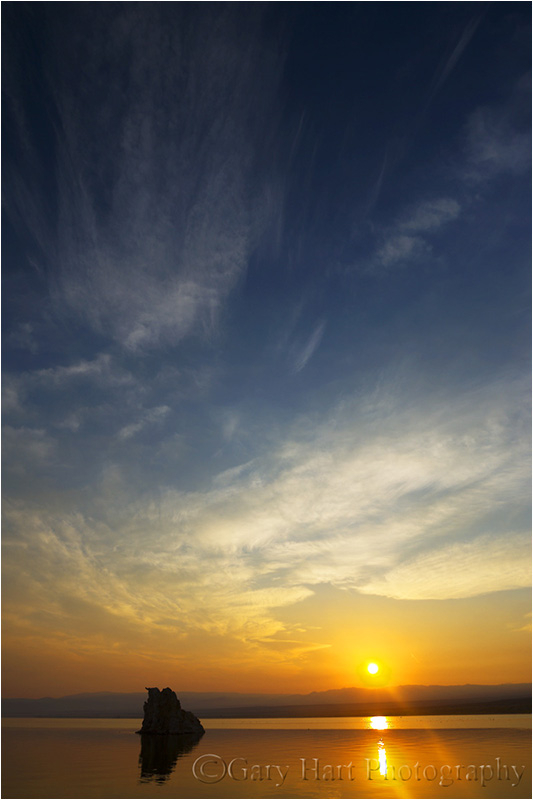 In this whole Eastern Sierra thing I've been doing lately, one goal has been to illustrate the photographic variety on the less traveled side of California's backbone. So far I’ve shown you Mt. Whitney and the Alabama Hills (that sounds like a bad bar band), the ancient bristlecone pines of White Mountains (the oldest living things on earth), the Sierra Wave and the amazing skies it generates, fall color in the canyons, and now Mono Lake.

Mono Lake is the largest lake completely within California (Lake Tahoe is larger, but it shares a disputed boarder with Nevada). Its extreme salinity makes Mono Lake inhospitable to fish and pretty much all other water-life known to the rest of the world. But it does have its own variety of shrimp, and is also home to numerous common bird species.

Of course what photographers are most interested in is Mono Lake’s Tufa towers, columnar vestiges of submerged springs that deposited minerals beneath the lake's surface. The tufa columns were exposed when upstream siphoning, to quench the significant Southern California thirst, significantly lowered the lake. At South Tufa, the most popular place to photograph the tufa, the fragile towers jut from the water and surrounding terrain. Here the orientation and curve of the shoreline and protection by the tufa formations, create sheltered coves that make for beautiful reflections on calm mornings.

Sunset at South Tufa is beautiful, but the best time to photograph here is sunrise. That’s when the day’s first light crests the relatively low hills to the east to skim the lake’s surface, bathing the tufa towers and surrounding terrain in a beautiful warm light. Combine all this with the Eastern Sierra’s frequently dramatic cloud formations and it’s clear why South Tufa isn’t much of a secret to photographers. Fall mornings are particularly crowded, as the region is overrun by photographers flocking to photograph the nearby fall color.

Fortunately, Mono Lake is a big lake, great for exploring, with a wealth of less known photo locations for the resourceful photographer (see my March 30 blog post). But every first visit to Mono Lake should include South Tufa. Get there early, at least 30 minutes before the posted sunrise (scouting the afternoon/evening prior helps a lot), claim your spot, and hold your ground—by the time sun arrives don’t expect to be alone.

Maybe this is a good time to raise some photography etiquette. My rule in the field is to respect the composition of those who have arrived before me, and I expect those who arrive after me to respect mine. If I inadvertently set up in someone else’s frame, I have no problem being asked to move (sometimes I’ll ask if I have time to fire off a quick shot but will defer to their preference), and I have no problem (respectfully!) asking trailing photographers to move out of my frame. I’m a little more patient with tourists, and often just wait them out—they don’t understand my priorities, and asking them to honor my needs creates tension that reflects poorly on the entire photography community.

I love the gold-to-blue transition that occurs near the eastern horizon at sunrise and try to capture it whenever possible. In today's image I opted for a simple vertical composition that emphasized the color in the sky by putting the horizon line very low in the frame. To include as much sky as possible, I went as wide as my lens would allow. Spot metering on the brightest part of the sky (near the sun), allowed me to retain the rich color throughout, at the expense of seriously underexposed tufa. But at this distance the tufa’s shape is all that mattered, so I preferred it to be rendered in silhouette anyway.

Next post: August 7 (please view my previous posts by clicking the arrow in the upper left of today's image)

Very, very pretty!
Love the composition.
The reflection of the rock just adds that final touch.

@Anina: Thank you, Anina. So much of composition is simply achieving visual balance, and I thought the tufa (rock) was ideal for balancing the visual weight of the sun.

Superbly photographed. What I find interesting and very different is the angle you have taken the photo from. Normally the sun's reflection would be pointing to the middle of the photo, but you seem to have taken this differently and creatively. The rays from the sun leading out of the photo look wonderful. Thank you.

@dobbino: Thanks, Rob. Shooting into the sun requires care, but results in some great effects, doesn't it?

I love the gold to blue in the morning sky as much as the warm afterglow following sunset turning to navy.
By 'spot metering' in the bright sky, the colors are more intense; I've seen this at sunset also.
This is gorgeous, Gary.

@Judy: Thank you, Judy. My favorite thing about this image is the color. It's not hard to get color like this shooting toward the sun at sunrise (or sunset) if you underexpose--you just have to remember that you're photographing shapes and not detail. When I talk about wanting my creativity at capture rather than processing, that's the kind of thing I'm talking about. FYI, I want as much control over my camera as possible (I don't want it making any decisions), so I shoot 100% in manual mode using spot metering.

Stunning sunrise! Like the low horisont and the reflection in the water. The sky and the colours are wonderful.

@pernilla: Thank you, Pernilla. I'm always looking for opportunities to capture a reflection of a colorful sky.

Awesome Gary! This big sky image has such impact! And of course the colors are stunning!
Your control of the light is fantastic! you even have some detail on this side of the rock!

@Tracy: Thanks, Tracy. I love the way this picture shows the transition from sunrise gold to blue sky--they're such different colors, and there's no specific place where you can say the sky ceases being one color an becomes the other, yet somehow the change happens. One of my favorite things about photography is capturing extraordinary things that are usually overlooked.

Love the composition here showing off the cloud design at the top and how it transitions to the color near the bottom of the frame.

And, AMEN to the 'etiquette' part. I've been on workshops/tours where one person wanted THEIR shot - at the expense of everyone else being able to get theirs. Important point with wide angle lenses!

@Barbara Kile: Thanks, Barbara. I think we landscape photographers need a consensus in our approach to the rest of the world. It seems everyone's out there with their own agenda and rules, often with little regard for their effect on others. Last spring in Yosemite I chased a photographer out of a meadow, partly because he simply didn't belong there, partly because he was in the frame of the rest my group, and partly because photographers like that reflect on all of us (who are generally pretty conscientious) and are responsible for more restrictions on everyone.

I absolutely love the simplicity of this! It's an incredibly striking shot!

@Jen: Thanks, Jen. I love your image from today as well--I hope everyone reading this checks it out.