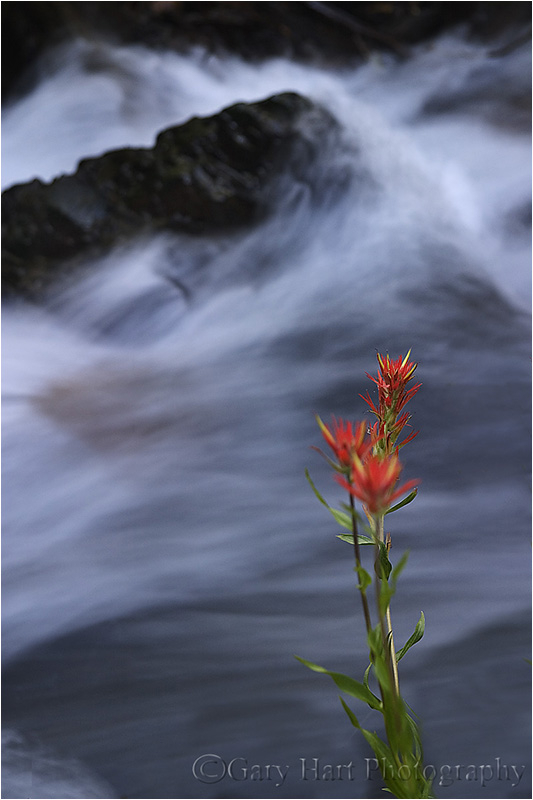 It seems if I'm not taking pictures in Yosemite, I'm somewhere in the Eastern Sierra. Go figure. To the tourists, Highway 395 is a (relatively) straight stretch of road on the way to somewhere else. But photographers have started to appreciate the amazing opportunities here. And I'm not talking about merely pretty scenery, I'm talking about unique stuff, diverse stuff, world class stuff: Mt. Whitney and the Alabama Hills, the ancient bristlecone pines of the White Mountains, Devil's Postpile (look it up), Mono Lake, and Bodie. And these are just the well known subjects. There are also many canyons carved into the precipitous eastern side of the Sierra with gem-like lakes and pristine streams (oh, the fishermen have discovered these features, but so far the photographers and fishermen seem to coexist pretty well).

While the Eastern Sierra is most known for its big skies, dramatic clouds, and sweeping vistas, it's the assortment of steep-walled canyons that I most enjoy photographing. Just west of Mono Lake is my favorite, Lundy Canyon. Lundy Canyon was carved by Mill Creek, which starts as snow-melt in the shadow of 12,000+ foot Mt. Conness and North Peak, eventually dropping into (the not particularly photogenic) Lundy Lake, and ultimately into Mono Lake.

My favorite stretch of Mill Creek is just upstream from Lundy Lake, where the pavement ends and drivers without high clearance need to pick their way with care along a rough but well-defined dirt road (I've done it in a Corolla). Here Mill Creek widens into a series of unnamed ponds, courtesy of a very active beaver population. Tall grasses, decaying logs and snags, and dense aspen groves beckon photographers to virtually any spot wide enough to park a car. And at the end of the road you can take a 1/4 mile aspen-lined walk to a slightly larger, beaver-dammed lake fed by a waterfall on the far side.

While the abundant aspen makes me particularly partial to Lundy (and the rest of the Eastern Sierra) in autumn, it's actually quite beautiful in any season. In summer it's a wildflower lover's paradise. I found this paintbrush while exploring near the end of the dirt road on a July morning.

The key to this image was my attention to the background. I'm afraid many landscape photographers limit their world to the lateral, left-to-right plane. As I've said in previous posts, those photographers can almost certainly improve their results by becoming more aware of the depth (front-to-back plane) of their images.

As I hope this image demonstrates, not every landscape scene requires maximum depth of field. In this case my primary photographic challenge was determining the balance between depth of field and motion blur. Clearly the flower needed to be sharp, but I wanted the creek to be soft so it wouldn't compete, yet recognizable enough to provide context. I added an extension tube and played with my aperture setting, using my depth of field preview button until I achieved the effect I wanted.

I think an underrated aspect of the Eastern Sierra is that more than the great vistas and beautiful skies, there are many, many places like Lundy Canyon with countless opportunities to make the foreground the primary subject. These scenes are my greatest challenge because I feel like my success is never limited by the possibilities, but rather only by my ability to find them.

When my originally scheduled Eastern Sierra fall workshop filled I scheduled a second one, September 29-October 3, http://www.garyhartphotography.com/EasternSierraFall09.shtml. That one's starting to fill too, but I still have a few spaces remaining. I’ve timed it to coincide with a full moon, so among other things, we’ll be doing some moonlight photography of Mt. Whitney from the Alabama Hills. And we'll definitely be photographing in Lundy Canyon.

Next post: July 20 (please view my previous posts by clicking the arrow in the upper left of today's image)

Beautiful work and the colors are just great.

Wonderful colours and composition. The water background almost seems like a painting.

Very Zenlike. (When I was a passionate backpacker in the 60s, I always wanted to live in Bishop.)

@john4jack: Bishop is a great place for photography and if I wasn't married I'd probably live there.

Indian Paintbrush is NOT easy to photograph; I've done my best and often failed.
The slightest bit of breeze throws off the camera's sensors.
This is a wonderful capture of the one section and then the rushing water in the DOF. Bravo!

@Judy: Thank you, Judy. Yeah, I think this is the only paintbrush image I have that I'm satisfied with.

I love the abstract-ness of this "nature" image. It is glorious. The motion against the static Paintbrush draws me back to that center-right bloom.