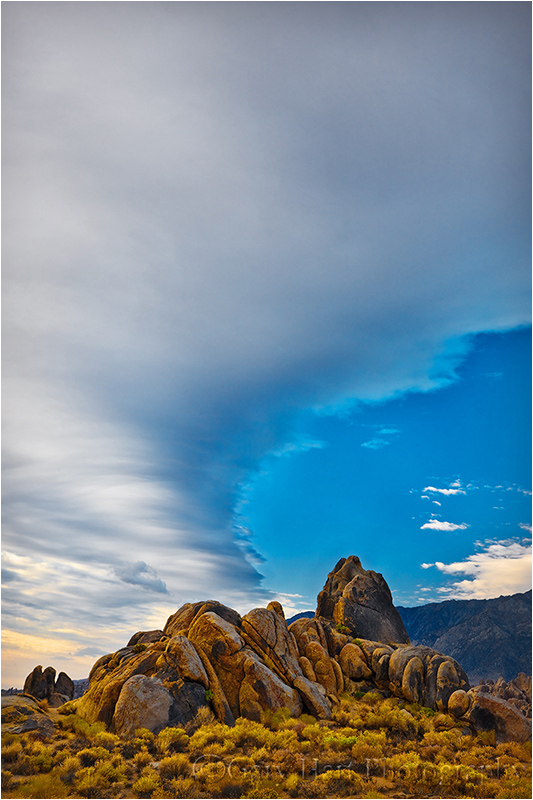 Thanks for indulging yesterday's detour. I now return you to your regular programming....

What's the deal with Eastern Sierra skies? Is it just me or does is seem that a disproportionate number of my Eastern Sierra images feature dramatic clouds? Of course there's a meteorological reason that involves the prevailing west-to-east flow of air over the Sierra Nevada Mountains that rise gradually on the west from around sea level to over 14,000 feet, then plummet precipitously on the east side. But the bottom line is that it makes for fabulous photography.

On the morning I took this picture I had guided my Eastern Sierra fall workshop group to the Alabama Hills' Mobius Arch (see my January 27 blog) for a Mt. Whitney sunrise. After a morning of nice photography we started to head back to the vehicles when I saw this sickle-shaped cloud moving up from the southwest.

Too often we become so focused on what we set out to shoot--in this case it was Mt. Whitney and the arch--to the exclusion of other great opportunities. Light and sky can change fast, so merely surveying the surroundings when you arrive isn't enough. Train yourself to slow down. Step back and look around. Look left and right, front and back, up and down. Take your camera from the tripod and play with compositions.

On that morning last fall there was nothing subtle about this cloud. In fact it was was quite prominent, stretching from near the horizon to nearly the zenith. But many (though not all) in the group had stopped seeing the world like photographers and had shifted into "what's for breakfast" mode. I called their attention to the sky and urged them to take a few minutes to find a foreground for it. Fortunately foregrounds aren't a problem in the Alabama Hills, so I didn't need to look long. The whole area is riddled with weathered granite boulders, some standing by themselves, others assembled in groups like this, and still more piled high in mountainous jumbles.

I walked across the road toward these rocks and made a few shots. I went wide to take in lots of sky. When the most interesting part of the scene is the sky, I position it prominently in the top two thirds of the frame (at least). I started vertical, but also made some horizontal compositions (one of which will be in my book). Then we went for a nice hot breakfast.

Workshop update
I still have a few spaces remaining in my Eastern Sierra fall workshop, September 29-October 3, http://www.garyhartphotography.com/EasternSierraFall09.shtml. I’ve timed it for a full moon, so among other things, we’ll be doing some moonlight photography of Mt. Whitney from here in the Alabama Hills.

Next post: July 17 (please view my previous posts by clicking the arrow in the upper left of today's image)

Fantastic! that cloud is crazy! and the colors are just wonderful :)

@Tracy: Thanks, Tracy. That's exactly why we go out at sunrise, isn't it? Terrain that would be a washed out brown in the harsh light of day reveals all its color in the warm morning glow. And that ubiquitous yellow shrub isn't particularly photogenic most of the day, but I kind of like it here.

Nice photograph... It does seemed to me initially that the photo was worked upon... but then I too believe that the cloud movements create some of the best abstracts I have seen in my life. Kudos for sharing all the nice cloud photographs you have taken.

@Vinay: Thanks, Vinay. I'm trying to understand your "worked upon" reference. Surely you know that it's impossible to photograph with a digital camera and not have an image that's interpreted either by the camera or the photographer (or both). If you mean the scene itself, I assure you it's completely untouched. If you mean the processing, I simply applied my standard processing, which is curves, dodging/burning, noise reduction, and sharpening. I also lightened and desaturated the blue channel in the sky a bit. So if that's what you mean by "worked upon," I'm afraid I'm guilty.

In general I'm happy to share my processing workflow with anyone who asks. Some images require more than others (and if memory serves, the biggest problem with this one was evening out the sky).

Outstanding work Gary! Your images are all very well executed. Love the way the clouds grab your eye and carry you through this image! Again well done!

Wow, another amazing colorful shot. Nice composition between the rocks and clouds.

Very nice , you take really this shot at the good moment at the right place. well done

Another great shot Gary. Would like to see you post an article/blog entry on your common pp techniques.

@Joe: Good idea, Joe. I am certainly not a PS expert--rather, I have a workflow that works for me with the minimum amount of processing time, but I think that's the way everyone should do it. For me photography is so much more rewarding when the creativity is in the capture and not the processing.

Hi Gary, When I said worked upon, I actually meant a lot of post processing... Coz, for me the clouds seemed to be dramatized! They are so smooth... they look more like sea water than clouds!! Also the rocks look a little out-of-place! But then I said I believe, because everyday when travelling home from my office, I too see such dramatized sky and beautiful patterns created by the very same clouds! So you know my response was "I.... err.... believe it.... but.. hmm... you know..." kind of response!!!

I truly appreciate your photographic skills as much as your post-processing skills. Thank you for explaining about the photograph and the post processing that you have done on the same.

Between.. I checked your website (eloguentimages.com) You have truly amazing collection of marvelous pictures! Kudos to you for having patience and for having spent time and money to take such wonderful photographs.

@Vinay: Thank you for your comments, Vinay.

Amazing scene! The clouds and the morning light is absolutely fantastic.

The arch in th sky bringing the attention to the detail in the rocks is very effective and elegantly captured. Well done.