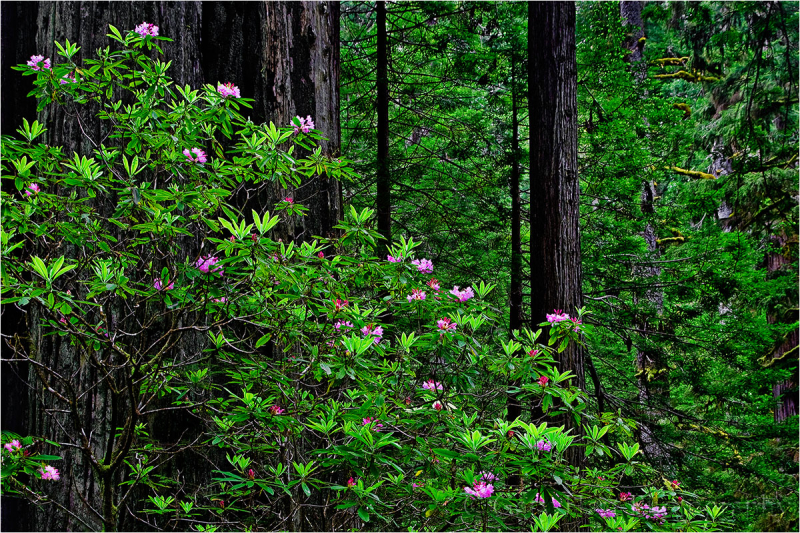 One of the great things about Northern California is the diversity of world class subjects within a few hours drive. From my front door in four hours or less I can photograph Big Sur, Monterey/Carmel, San Francisco, Point Reyes, Muir Woods, the Napa Valley wine country, Mt. Shasta, Lake Tahoe, Mono Lake, and Yosemite (plus many lesser known scenic locations). And after Don Smith's Mendocino workshop last week (BTW, as much as I love leading workshops, I really enjoyed assisting for a change--all the good stuff like taking pictures and working with the students, but none of the headaches like, "Do I really want to drag them out of bed at 5 a.m. if there's too much fog for sunrise?") I can add to this list of Northern California locations I've photographed the Mendocino coast, an underrated (beyond California) destination with rocky shorelines, redwood forests, and in late spring, blooming rhododendrons.

The redwood forests along California's north coast are so dense that even at midday it feels like dusk. I took today's shot 3 1/2 hours after sunrise on an overcast morning. Despite the late hour the fog and thick redwood canopy required a one second exposure at f8 and ISO 400. Fortunately the morning was completely still, allowing me to maintain sharpness despite the long exposure.

A frequent topic of discussion during the workshop was managing and prioritizing the limiting factors of the scene. Don and I advised the participants to be aware of how the elements at hand affect what you're trying to do. When we shot along the coast a primary limiting factor was the wind, which played havoc with our attempts to photograph the abundant wildflowers. Since depth of field is so key in most wildflower images, the top priority was the f-stop and we compromised other factors, such as bumping the ISO or removing the polarizer to get the desired result. Even so getting depth of field right sometimes required a slower than ideal shutter speed and waiting for brief lulls in the wind.

The limiting factor in the redwood forest this morning was the limited light. Fortunately wind wasn't a factor, so I could make a one second shutter speed work. (The air is rarely perfectly still, so while I might have made two seconds at ISO 200 work, I decided the slight increase in noise was not worth the extra softness I risked by doubling my shutter speed.) If there had been a perceptible breeze I'd have probably gone f5.6, making sure the foreground rhododendrons were in focus (and tolerating a little softness in the forest background) before increasing to ISO 800, but I'd have gone to ISO 800 before dropping to f4.

All these mental machinations are because the pieces necessary for a good image rarely fit perfectly into place--we usually have to compromise something (sometimes even the composition itself). What's essential is to think about the factors and make intelligent choices. I can usually forgive myself when I make a conscious decision that doesn't work out; I'm much less forgiving when I realize I missed an opportunity because I failed to think it through. Did I make the right decisions on this morning? Maybe yes and maybe no (hindsight is 20/20), but I'm certainly satisfied with my results here, so there's no second-guessing today.

Next post: June 22 (to view previous posts, click the arrow in the upper left of today's image)

This is a lovely image. I love the bright flowers against the old redwood tree.
An especially timely lesson for me today, too! I really want to push myself past the point I seem to be stuck at, and the advice of "thinking it through" is just what I needed to hear! I can't tell you how many times I have gotten home, looked at my images and thought "Oh no, why didn't I try another setting?"

@Tracy: As always, thanks for your detailed comments. I realize this image isn't as spectacular as some of my recent posts, but there's so much beauty in the "unspectacular" (and non-visual) side of nature. I took this picture the day after the workshop ended. I spent over two hours in this grove and didn't see a single person. The overcast and dense canopy gave the scene a cave-like quality that intensified my sense of seclusion and heightened my non-visual senses. So while the vivid blossoms against the darker redwood where what my camera captured, that was just a small part of my sensory experience there. It was hard to leave.

Stunning photograph. The vibrant green makes the gorgeous rhododendrons pop. Reading your commentary, I wonder how much of what you said is. as the result of your experience, integrated within you?
One of my goals is to increase my technical knowledge to the point that I make the correct decisions as my primary energy is devoted to the creative process. (It is for a similar reason that I have decided to limit the software tools that I use in processing. I figure that if I learn Lightroom and Nik's plug-ins really well, with a touch of Photoshop added, I will do better than trying to master all of the intricacies of PS, Capture NX2, Aperture and a slew of plug-ins.) One of my major objectives in the capture phase is simplicity; the same is true of processing. I very much buy into what Dave DuChemin is saying in his latest book. And the more energy and focus I can give to "vision," the better.

@john4jack: Thanks, Jack. I'm totally with you on the simplicity thing. The more complicated things are (both in the field and at my desk), the less I can concentrate on photography. I still approach things in the field like a film shooter and only incorporate technology that makes my life easier. Another way of putting it is that I want my creativity to be in the capture, not the processing. Workflow in the field doesn't need to be complicated: generally I start with the aperture and then decide which combination of shutter speed and ISO will get me there with the fewest compromises. If there's a potential for undesirable (wind-induced) motion blur, I increase ISO; if the air is still I increase shutter speed. Of course there can be other variables, such as intentional motion blur (like moving water), but you get the idea.

Wonderful capture and really like the thinking behind this great photo. Thank you for sharing all this experience with the rest of us!

Thanks for your response, Gary. Personally I have no quarrel with those who do their primary creative work in the digital darkroom. However, that is not what brings me joy. I absolutely love being in the field. A major reason that I try to get it right in the capture is so I won't have to do as much in front of the computer. (I also delight in printing. There is an inexplicable feeling that comes over me when the hard copy comes out of the printer.) Have a nice weekend.

Beautiful image Gary. Two elements about this image I really like: the diagonal line created by the sloping rhododendron bush which adds visual motion to the image, and the saturated greens due to to overcast light. Great job!

@Don Smith: It was wonderful back there on the day following the workshop. Not just for the photography, but simply the experience of being there. It was just me and Mother Nature the entire time I was there. Well worth the three hour drive back up the coast. (And if you like diagonal movement, you'll like my next post, also from the workshop.)

Gary - wonderful composition and I always love the flowers in contrast with the cool of the forest canopy! Great work on this and I hope you have a wonderful Father's Day! Hopefully I'll see you in Yosemite!

Gary, love your commentary, and how you walk us through your thinking on how you make do in a less than ideal situation. Of course, your photo is stunning - I come to expect that from you... Glad you teach us what you know with your blog entries.