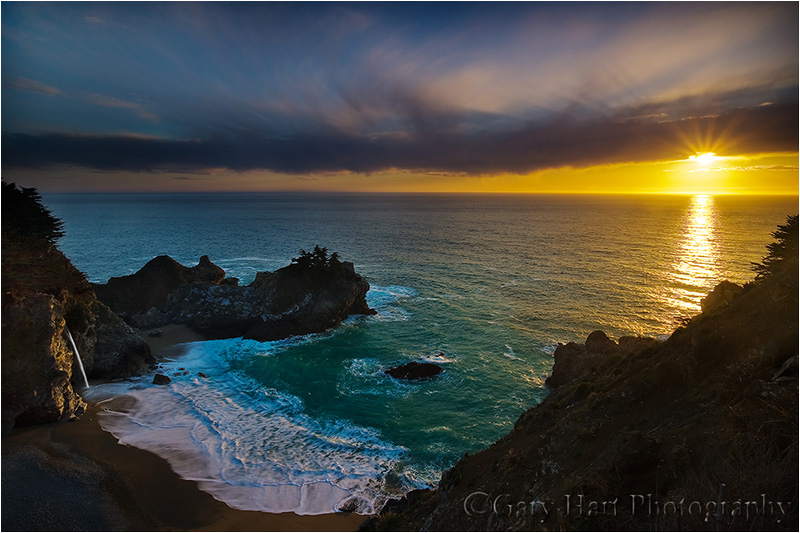 So much of successful photography is anticipation—evaluating the scene, anticipating the conditions, and being prepared when the magic happens. The more time in the field we spend ahead of the light and the less time we spend reacting to it, the more successful images we’ll capture.

Today’s image is from last spring. I was assisting Don Smith’s Big Sur workshop and when we arrived at the vista for McWay Fall in Julia Pfeiffer Burns State Park the sun was behind the clouds, creating a dull, gray scene. But it didn’t take rocket science to know that the sun was dropping toward the western horizon, and before its ultimate plunge into the Pacific it pretty much had to emerge from the clouds. I also knew when that happened there would be a few seconds at the sun’s first appearance when it would be a point source (again, not rocket science) and I’d have a chance to capture a sunburst.

Getting a sunburst is as simple as photographing a bright point-source of light at a small aperture. The sun is great for this because the solar rays spread a long way, but I’ve done it with the moon, a lighthouse, and Venus (though of course the rays don’t spread too far but a cool effect nevertheless), to name a few subjects. But with the sun you have to be fast because if you wait too long too much of it emerges and you start blowing out the sky, so you need to capture it when just a thin sliver of the solar disk is visible.

Once I decided a photograph was imminent I advised other nearby workshop participants of what was about to transpire and moved up and down the trail (McWay Fall can only be photographed from the trail overlooking the beach—access to the beach itself is explicitly forbidden) until I identified the composition I wanted. The next step was anticipating the extreme exposure problems I’d encounter (bright sky, foreground shadows). HDR would have worked but I’m not a fan, so I opted for graduated neutral density filters, stacking a pair that gave me five stops of correction. I set my aperture to f18 and adjusted my shutter speed until I had the exposure right.

When I had the exposure under control I went to work refining the composition. I started by balancing the waterfall with the sun. Because I was on a tripod I could fix my composition and study it in live view. This helped me realize that I didn’t want to cut the waves off at the bottom of the frame, something I felt would draw the viewer’s eye out of the frame. So when the sun finally appeared I timed my exposure so the waves didn’t quite reach the edge of the frame, instead framing the bottom of the scene with the darker beach.

With my first capture I checked my histogram—normally I try to avoid blowing any highlights, but I knew it would be impossible to hold the brightest parts of the scene (the sun and the direct reflected sunlight on the wave tops), so I was okay with a few “blinkies” as long as I didn’t completely clip on either side of the histogram. The post-processing was relatively straightforward, mostly dodging and burning to even the light a bit.

If I had waited until the sun appeared I'd have certainly missed something. And and to underscore the anticipation lesson, let me add that Don didn’t get this shot that evening because he was up the trail a bit working with a workshop student who insisted on using that moment to learn manual metering. Don (and the student's husband) tried to tell her what she was missing, but she was adamant. Far be it from me to criticize anyone for trying to advance their photography skills, but unless you want to risk missing something special, when the magic is coming at you fast, you should revert to what’s most comfortable and save the learning for when things are a bit more static.

Next post: June 19 (to view previous posts, click the arrow in the upper left of today's image)

I don't know how people get bored with sunrises and sunsets. The warmth of the light is amazing as is the colour spectacle.

@Ted Szukalski: Thanks, Ted. I think it's because they're such common subjects, sunrises and sunsets should be held to a higher standard. I'm glad this one works for you (and so many others, myself included).

Absolutely beautiful! Fantastic colours, and I'm glad you were able to time it so well!

Another wonderfully calculated image, Gary. I sincerely thank you for your lesson, both on patience and setup.

@Claude: Thanks, Claude. My most personally rewarding images are those that combine foresight and fortune.

This really worth the waiting...Unforgettable sunset photo!

Beautiful sunset! A perfect picture worth waiting for.

I love the composition of this photo. Waiting for the waves....I don't think I would have thought of that! But seeing what you captured - I will be trying it next time.

@Tracey: Thanks, Tracey. The smallest things can be a distraction. You'll find that the more time you spend looking through a viewfinder, the more these distractions won't seem so small.

This is the best image I have ever seen of McWay, Gary. And living here I've seen a few! (I may have taken a few, too) The balance between the two main subjects is wonderful. I would expect them to be at opposition with each other, but it does not feel like that at all! Superbly crafted.
As always, thank you for the knowledge and experience you willingly share with us.

Nice shot again and thanks for your comments

Perfection!!! It is such pleasure looking at your photographs! :))

You have some great shots Gary! Beautiful work!