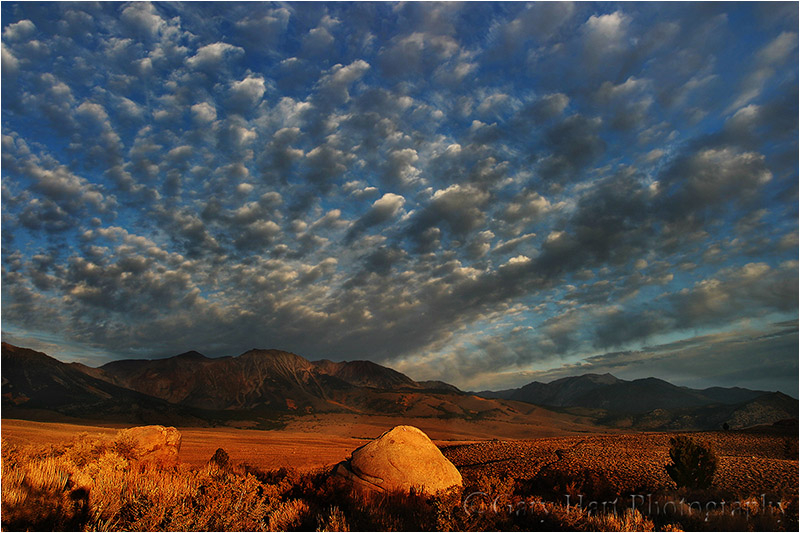 Most of us got our first “exposure” (pun unavoidable) to photography with pictures of people: remembrances of family, friends, events, and so on. Occasionally we’d venture to the beach or mountains and return with photographs that recorded these locations we’d traveled to see. We'd identify our subject, then photograph it. What could be simpler?

But jettisoning this subject-first approach is the first step for landscape photographers who aspire to capture images that touch the emotions of their audience as does the work of Ansel Adams, David Muench, and Galen Rowell (to name a few). Creating evocative landscape images requires ignoring the obvious subject in favor of what I call “finding the magic.”

A few years ago I found myself without a plan on a fall morning in the Eastern Sierra. This was a last-minute trip I’d taken with my wife and the photography was secondary (really), but I woke before sunrise (old habits die hard) and decided to go for a drive with my camera, knowing I'd be back well before breakfast. It was dark as I left the inn, with just a thin stripe of light low in the east. As I drove north on US 395 toward Mono Lake, the approaching dawn revealed an organized formation of clouds stretching from horizon to horizon. Eastern Sierra skies are legendary (something about the flow of air over the Sierra crest), but I’d never seen anything quite like this.

When the direct sunlight arrived I was pretty much in the middle of nowhere, but the sky made it clear I needed to identify something to shoot. I took the next exit, which turned out to have a view of Mono Lake and little else, and unfortunately, Mono Lake wasn’t where the magic was. On the other hand I knew that a picture of the fabulous sky with nothing to anchor the frame wouldn’t give me anything more than a record of the moment. So I hopped out of my car and looked toward the best light. Spying this beautifully lit, solitary boulder a short distance from the road, I grabbed my gear and raced over, firing off a few shots before the light left.

Of course the most special part of the scene is the sky. And while there’s certainly nothing inherently exceptional about this boulder—it’s one of many dotting the area’s parched landscape—as beautiful as the sky was, without the warmly lit boulder I don’t think the shot would have worked. The key to this image is that my first priority was the light, even though that meant ignoring a beautiful view of Mono Lake at sunrise. The light led me to this ordinary boulder, which for just a couple of minutes that morning became extraordinary.

Next post: June 13 (to view previous posts, click the arrow in the upper left of today's image)

A great lesson Gary, Thanks! And a gorgeous shot to go with it :)

I like the warm tones of the foreground and the shadows over the mountain on the background ... The sky captured at its best !!!

Wonderful tones on this image Gary - and what a spectacular sky!! The other item of visual interest for me is the shadows throughout the landscape - wonderful work!

Wow! This is absolutely breathtaking! Magnificent!!!

Wonderful the color saturation and contrast.

amazing picture! I love the contrast between cold and warm. Very beutiful!