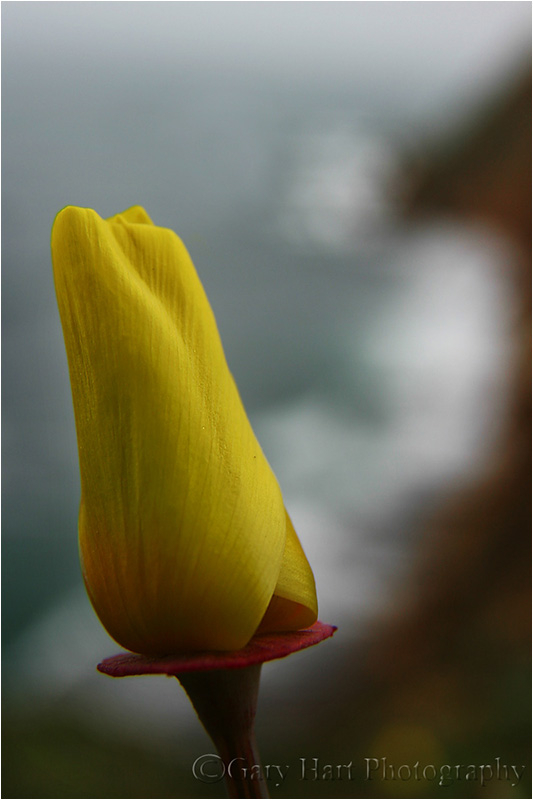 Soon I’ll be off to Mendocino (and thereabouts) for a few days among rocky coastline, dense redwood forests, swirling fog, and (fingers crossed) blooming rhododendrons. So to get myself in a coastal frame of mind, today’s image is one of my old favorites, taken with my 10D in the days of my digital infancy.

On this foggy spring morning atop Point Reyes’ Chimney Rock the poppies were tightly closed against the cold and wind. The damp chill made a quick retreat to a fire and book sound mighty appealing, but the tug of Mother Nature’s own eloquence was even stronger. If the electric gold of an unfurled poppy is a gripping page-turner, the graceful curves of an enclosed poppy would be visual poetry.

So off I went in search of a suitable subject. When I found a poppy I could isolate against the distant coastline I twisted an extension tube on my wide lens and sprawled on the ground for the necessary perspective. The extension tube limits my distant focal range, but that was part of the plan, as I didn’t want the strength of the rocks and surf to compete with the poppy’s gentle lines. Instead I wanted to use the arcing shore to frame the poppy, soft and just recognizable enough to establish context.

In those days before live-view composing a shot with the camera on the ground requiered pretzel-like moves. My contortions were complicated by the steepness of my location—no more than one-and-a-half body-rolls down the steep slope would have launched me over a vertical precipice and onto the rocks 100 feet below. Peril notwithstanding, I found a composition I liked and positioned my beanbag (homemade with a Ziploc and package of lentils) to steady the lens. I barely breathed as I snapped off several shots with my remote, timing for lulls in the breeze and bracketing for depth of field. I confirmed my result in the 10D’s small LCD but it wasn’t until I returned home and viewed my images on my monitor that I was able to choose the one that worked best.

Next post: June 10 (to view previous posts, click the arrow in the upper left of today's image)

Wonderful, I'll visit your blog too

Thanks Gary! I have been feeling quite stale, and "down in the dumps" photographically speaking. You have a way of summing things up that makes me feel like good images are possible!
I love your photography, as you know. But it is the tips and your writing that keep me visiting every post!

@Tracy: Thank you Tracy, I appreciate hearing that. When you start getting a little down about your photography, remember that you live in an area where people travel from all over the world to visit. My prescription is a trip to Point Lobos--there's so much variety there, from tide pools to crashing surf, wildflowers to wind-sculpted cypress that you can simply take a walk without your camera and always find something that resonates with your current state of mind. (Yosemite does the same thing for me, though it's not quite as convenient for you.) And if you're tired of the ocean, take a drive up into the redwoods. But just get out in nature without your camera for a while.

Exquisite. Live View is so appreciated for close-ups.

Love the simplicity.... The framing, exposrue and clarity are all superb!