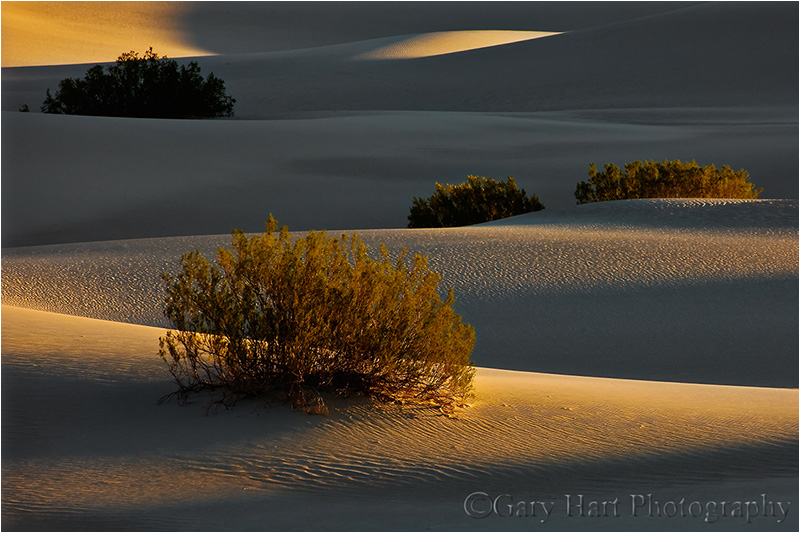 Sunrise on the Dunes, Death Valley

May was a great month for me, with three Yosemite visits that each yielded fantastic images, some of which are still to be posted. But it's pretty hard to follow a double rainbow from Tunnel View, so I'm going to take a break from Yosemite for a bit, just to show you that we have other beautiful scenery out west (and to show you I can shoot something besides Yosemite).

My workshop in Death Valley and the Alabama Hills (at the base of Mt. Whitney) in January was blessed with fabulous conditions, including beautiful sunsets and a few snow flurries at the panoramic Augereberry Point, high above Death Valley. But the most popular part of our Death Valley stay was a cloudless sunrise on Mesquite Dunes near Stovepipe Wells.

We stayed in Furnace Creek, about a 25 minute drive from the dunes at Stovepipe Wells. And despite their apparent close proximity to the highway, it's a good 20 minute walk (trudge) through fine sand to get out to the middle of the dunes where the photography is best and the sand isn't marred with footprints. Given that I like to be in place 30 minutes before sunrise to avoid missing the color in the sky, it was still extremely dark when we left (and there's nothing quite as dark as moonless dark in the desert).

Sand dunes make great photographic subjects, with lots of curves, lines, and texture just begging for extreme oblique light. The way Death Valley is oriented, in January the sun doesn't have to climb far to reach the valley floor, which means the first light on the dunes is particularly warm in January.

It was still quite dark when we started our hike (there's no trail--you just pretty much set out in the general direction of the dunes) but by the time we got in position the sky had brightened significantly. The morning was cloudless, not great for color in the sky, but perfect for the sun's first rays on the dunes so we had lots of fun shooting in the soft, even light that preceded the sun. Because the window for the best light is small, was careful to remind shot everyone to have their compositions ready for the first rays of direct sunlight--the last thing you want to be doing in rapidly changing light is "panic shooting."

What I like about photographing dunes at sunrise is the contrast between light and shadow that accentuates the dunes' curves and angles. Without getting too technical, I'll just say that this visual motion is pleasing to the eye. Our brain is drawn by the "motion" these lines create as it subconsciously follows them. Another source of visual motion is patters of individual elements like rocks or shrubs. A single element becomes a fixed point of interest for the eye to rest upon; a group of elements creates virtual lines as the eye/brain relationship subconsciously connects them. In today's image I used my 100-400 to isolate distant dunes and eliminate the not-too-interesting sky. I used these sunlit shrubs to create an angular movement through the frame (lower-left to center-right to upper-left) that complements the diagonal lines of the dunes.

At the risk of confusing you further, let me add that these compositional decisions aren't all conscious--the analysis above usually occurs in my left (logical) brain after the fact. Sometimes as I plan a shot I may start in my left brain, but when it comes time to click my shutter I try to turn off my left brain and let my right (intuitive, creative) brain go with what feels right. Many photographers find themselves ruled by one side of their brain or the other, or (often worse) find the two sides of their brains in conflict. I think both the logical and intuitive sides of the brain are essential to consistently creating successful images, but it's equally important that they work in synch. For this there's no substitute for just getting out and shooting.

Next post: June 4 (to view previous posts, click the arrow in the upper left of today's image)

I love this photo!

This is the most beautiful dune shot I've ever seen! I love the way the dunes have a flowing, ocean-like quality that is perfectly emphasized by the soft light. Wonderful!

So beautiful! I love the play of light on those soft curves of the dune ... a wonderful photo!

Gary thanks for the discussion and very nice work on this - I love the soft curves and play of shadow and light! Great shot - I guess this would be the opposite location to shooting in Yosemite with rain coming down!

@Scott Schilling: Yeah, Yosemite probably received as much rain that day as Death Valley gets in a year. But that's part of what makes Death Valley a one-of-a-kind location. Thanks!

Love the shot - your compositional skills, regardless of which side of the brain - works fabulously. Great light, fun to see!

@Bill Jennings: Of course my wife would say neither side of my brain works....

Thanks for sharing Gary. Your keeping me motivated to get outside and into nature.

@Mike: Thanks, Mike. One of the real risks of digital is that it sometimes straps people to their computers. There's really no substitute for just getting out in nature, camera or not.

Nice elements all throughout. The lines, shapes, textures, and of course the play of shadow and light is very eloquent.