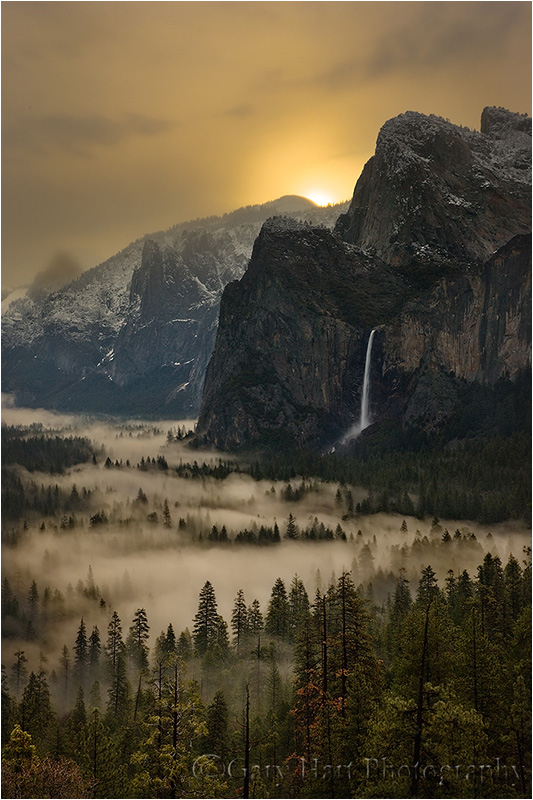 Posted by Gary Hart (California, United States) on 19 May 2009 in Landscape & Rural and Portfolio.

Here's a tighter composition of the scene that appears in my April 16 blog. For the details of its capture, read the discussion there.

Those of us who grew up shooting film became all too familiar with bracketing for exposure--without a histogram (remember those days?) there was no assurance that we'd nailed the exposure, so to increase our odds, we'd "bracket" exposures on either side of the metered value. I'm afraid that approach has unnecessarily carried over into the field workflow of many digital photographers--it seems it's a habit they just can't discard, or they simply don't trust their histogram (or their ability to read it).

Granted, there are still situations with digital where bracketing for exposure is necessary, but they should be limited to those shots where you plan to merge your images, either manually with Photoshop layers or through HDR (High Dynamic Range) software like Photomatix (neither of which I do). But really, learning to read a histogram should preclude your need to routinely bracket for exposure. Since switching to digital I take pride in nailing my exposure with the first shot, checking my histogram to verify, and adjusting only if necessary.

My point isn't to pat myself on the back--exposure really isn't that difficult. My point is to illustrate how bracketing has taken a different meaning for me since the advent of digital. When I find a scene I really like, I no longer bracket for exposure; instead, I bracket for composition. When I arrive at a location I like to poke around a bit, study the light and the elements of the scene, and fire off a few frames to get a feel for the area. But when I finally find a composition I like, I set up camp and work it. At the very least I'll shoot horizontal and vertical compositions, usually both wide and tight. I'll also with play alternate foregrounds, depth of field, motion blur if there's moving water, and so on.

Today's image is an example of bracketing for composition. It's amazing to me the number of times I've found things I originally missed, simply because I didn't stop looking. Rather than being satisfied with the first shot, I changed my framing and kept shooting, coming up with several images I like. For grand scenes I tend to start wide and move tighter, but this image actually preceded the wider April 16 image by a minute or two. I was backward here because I'm so familiar with Tunnel View and try to resist the April 16 composition because I have so many like it (albeit in different conditions).

In static light situations I'm fairly deliberate, almost calculating. But when the light's dynamic like it was this morning, I just keep shooting. I'm not talking about continuous-frame, machine gun shooting, I'm talking about steady and methodical, shoot-compose, shoot-compose, generally in an orderly pattern: wide-horizontal, medium-horizontal, close horizontal, wide-vertical, medium-vertical, close-vertical, new lens, repeat.... There's no time to think, so doing it this way helps me turn off my left (logical) brain and just go with the composition that feels right.

exquisite shot.....the light, the misty ambience & the composition are stunning....

Truly an amazing set of photos in your portfolio. Thank you so much for the detailed comments on what you were thinking when you were in the field. Your lessons are nearly priceless... Great emotional shot: you really do get the feel of the start of a new beautiful day.

@Bill Jennings: Thanks, Bill. I always start each post by telling myself I don't have much time and to only write a couple of sentences. I'm afraid that once I get started I'm kind of the writing equivalent of somebody who can't shut-up.

Gorgeous. I love the fog in amongst the trees. Very magical and mystical.

wow! that's quite the stunning landscape. i love the sun peaking over the edge. nicely done : )

Gary, again, a fantastic shot. It amazes me on the effort you put into each shot and then the effort you put in telling us what it took you to get that shot. I love the way you describe your shots. They all tell a wonderful story. A lot to learn for us. I also love the effect you give here. Great work. Look forward to seeing more.

I often browse photoblogs but rarely comment. This image has me stunned. The colour, the composition, the detail...all match up to a fantastic image.

@Alan Rossiter: Thanks, Alan--I enjoyed the images on your blog too. Someday maybe I'll make it to Ireland.

fog, waterfalls and sunlight all together, very cool!

This is so beautiful. And thanks so much for all the time you put into the writing too

I'm in complete awe. There are so many shots of Yosemite in the world, but this should go straight up to the stratosphere...right next to Ansel Adams. I think it's the softness and dream-like atmosphere. It's really evocative and moving. I can't wait to be able to do that...if ever.

You sound like a wonderful teacher and I hope to be a student someday.

Have a wonderful day!

@Beatriz: Thank you, Beatriz. That's pretty lofty company you put me with--I'll do my best to live up to it. :) You can do it yourself if you stick with the things you love most and never allow yourself to be satisfied with what you've already done.

Fantastic shot. Everthing about it is perfect. Congrats!

I've visited Yosemite and was enchanted, but you give the word enchantment a new meaning!
What a superb picture!