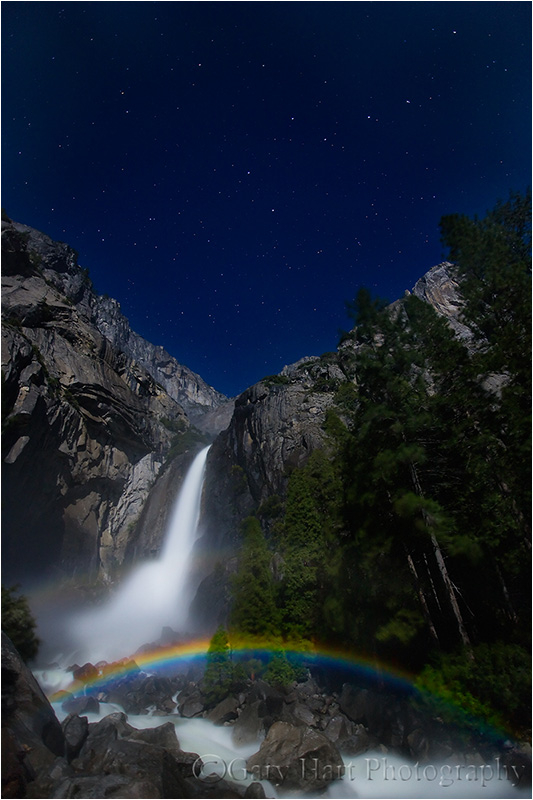 Posted by Gary Hart (California, United States) on 11 May 2009 in Landscape & Rural and Portfolio.

I just returned from my May "Shoot the Moon" Yosemite workshop. In my April workshop we had fantastic conditions (clouds, rain, snow) but no moonlight; in this workshop we didn't have many clouds, but the clear skies were perfect for moonlight photography.

The Lower Yosemite Fall moonbow has become a real phenomenon in recent years, drawing tourists and photographers from around the world for Yosemite's spring full moons (April, May, June). The moonbow is beautiful to behold, but difficult to photograph. Difficult not so much for the exposure (capturing it requires not much more than a sturdy tripod, a digital SLR with relatively good high-ISO capabilities, and a little knowledge), but rather for the water and crowds to be dealt with at the bridge at the base of the fall.

Before my group made the short walk up to the fall, I had them assemble their rain paraphernalia (umbrellas, towels, plastic bags) and ready their cameras with the proper settings. I told them how to use their rain gear to shoot in wet conditions (the mist at the base of the fall is equivalent to photographing in a light, blowing rain) and showed them how to focus in moonlight.

When we arrived we found the bridge overrun with people, as expected, though not as bad as recent years. The moonbow was clearly visible to the naked eye as a shimmering silver band. While the camera is generally less capable than the human eye in many ways, one distinct advantage a camera has is its ability to accumulate light. So while our naked eye can't see the color in the moonbow, exposing the scene for an extended duration accumulates enough light to bring out the color.

I stood on a bench and shot above the hundreds of people there. I like lots of sky in my moonlight shots, and having the Big Dipper overhead was a real bonus. I framed the scene as a wide vertical to capture the Dipper suspended overhead, as if pouring into the fall. To maintain patience with the flashes, flashlights, and frequent jostling, I reminded myself that while I was there to photograph, others were there simply for the experience. In fact, waiting for things to calm not only gave me time to plan my composition, it allowed me to appreciate the moment much more than I would have had all my focus been on my camera.

Wow! Absolutely breathtaking! Outstanding in every aspect! Bravo! Thank you for sharing some of the details :)

I've had the same problem with crowds at the base of Yosemite Falls. My solution has been to use a Nikon 35 mm PC (perspective control) lens. It has the effect of elevating your shooting position many feet in the air and above the distracting crowds in the foreground. With a DSLR with histograms, this old manual lens is very easy to use.

nice shot. romantic pic. but i think if u didnt add the rain bow in this shot it was better?! but really i like it

@alireza: Thank you for your comments, Alireza. We each have our own ethics when it comes to post-processing, but digitally removing something (as I'd have had to do if I didn't want it in the image) wouldn't be any better than adding a rainbow that isn't really there. I do have many shots of Yosemite Fall without the moonbow (including one from a different perspective in a my February 6 blog, http://garyhart.aminus3.com/image/2009-02-06.html), but being able to see and then photograph this moonbow makes this image (and experience) particularly special to me.

Wow fantastic shot, dont know what else to say!!

Amazing photo, with stellar composition! (pun intended!) Did you and Don coordinate on your posts today? It was fun to see two different versions of something I didn't even know existed before today! Thanks for sharing! :)

@Jen: Thanks, Jen. Actually we didn't coordinate, though we shared a chuckle about it on the phone this morning. For what it's worth, my image was from our Wednesday night shoot, Don's was from Thursday. On Thursday we were farther back, shooting Upper Yosemite Fall. This is the first time I've shot the upper fall when there was enough water to see the moonbow (sans color).

Fantastic composition Gary, I was just to the right of Gary on the wooden bridge looking for an entirely different frame. I can tell you I did not see the Big Dipper and cropped it - unfortunately - out of my frame to include more of the river below the bow.

@Don Smith: Thanks, Don. As you know, it was kind of a circus out there Wednesday night, hard to concentrate on anything. I was just happy to complete a 30 second exposure without a blast of mist, bumped tripod, or foolish flash. Lots of fun, though.

Stunning - love this image. Your images from Yosemite are fantastic. Well captured.

superb composition here! the scene suits vertical orientation and yo have done well to control light with a long exposure! the overall feel is one of a very crisp and clean shot with great sharpness and wonderful colours!

OK Gary, You & Don have convinced me that I MUST take a workshop from you! Our daughter's wedding is this Saturday, then I will actually have some time to start shooting again :) Have a great week!

@Tracy: Thanks, Tracy. It would be great to have you in a workshop. And congratulations on your daughter's wedding. Big weekend for us too as our daughter graduates from law school on Sunday. (But I'll bet your weekend costs more than our weekend.) :)

I really like your images and photo style. Keep up the good work.

Fantastic shot, Gary. Don Smith referred me to you. Glad he did. One more person to add to my Blogwatch. (I actually prefer your portrait view to Don's landscape view of this scene. My motto is: whenever in doubt, do both if possible.)

@john4jack: Thanks. Don and I shoot lots of the same stuff since we assist each other's workshops. It's always fun for us to see how each of us captured a scene.

Your description of how you planned this photo was helpful. The photo itself is incredible. This is a once in a lifetime kind of perfect alignment of each element - light, dipper, moonbow, locale. Great job of putting all these things together and then knowing when to release the shutter.

awesome shot I have never heard of a moonbow before so this was something new for me. Awesome shot 5 stars for me

Brilliant image Gary and good thinking on your composition with the big dipper. I agree with Tracey - I'm trying to figure out how to get over to the US for a workshop one of these days.

@Jason Kravitz: Thanks, Jason. It would be great if you could join a workshop sometime. I post lots of workshop images here and talk about all the technical and creative stuff, but I hope what doesn't get lost is how much fun these things are. Airfare's cheap.... (And I do have people come from Europe, so the precedent has been set.) :)

Absolutely stunning!! The combination of the moonbow, the clarity of the waterfall and the sky (the "Ursa Major" constellation is perfectly visible!!!!) is superb.