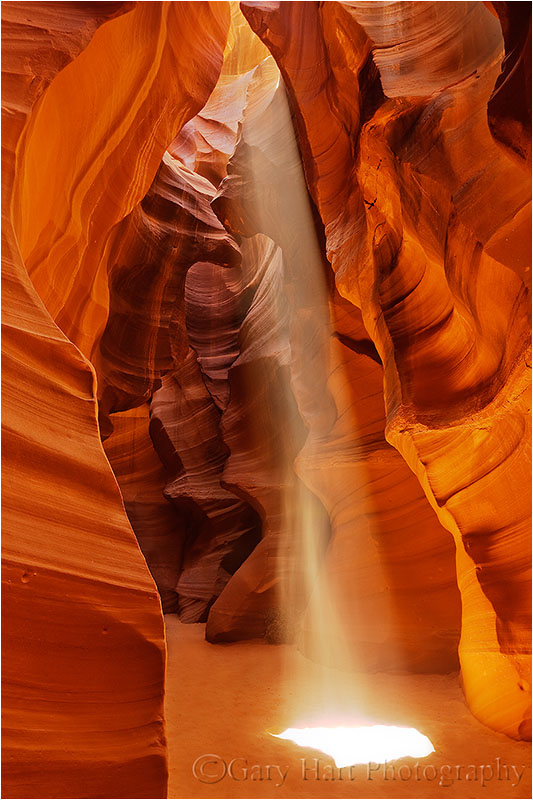 Posted by Gary Hart (California, United States) on 5 May 2009 in Landscape & Rural and Portfolio.

Today's image is from last week's trip to Northern Arizona. I leave for Yosemite tomorrow morning and won't be able to get to my Arizona images in earnest until I return on Saturday, but I'm so excited about the trip that I just couldn't resist posting something.

The first thing I want to say is that Upper Antelope Canyon is every bit as spectacular as the pictures you've seen—it's one of those places that feels like there's nowhere else in the world quite like it. Unfortunately, this uniqueness isn't lost on others, and Antelope Canyon at midday is probably the most densely populated patch of real estate in Arizona. The Navajo tribe that oversees the canyon has a real money-maker and they certainly leverage it to the max. Unfortunately, their unbridled capitalism is to the detriment of the visitors’ experience—the crowds during the brief midday “light-shaft window” would make a coal miner claustrophobic, and make quality photography difficult-to-impossible.

During the midday flood (maybe not the best word to use given the history here) of tourists our group spent most of our time jostling each other and others for position. Imagine trying to photograph, with a tripod, in the aisle commute-hour subway train.

Fortunately our group was the daily photo tour, which meant we arrived about five minutes before the rest of the tours, and left an hour after they left (and also an hour after the shafts left, but the light was still beautiful). We also had a fabulous guide who not only knew the canyon, she understood photography and photographers (thank you Angie!).

One other thought: I use the word “cliché” a lot, and it’s time that I elaborate a bit on what cliché means to me (lest the word itself becomes a cliché). By my definition, today’s Antelope Canyon image is a cliché. That doesn’t mean it’s not a beautiful image (I think it is), or that I regret taking it (I absolutely don’t); it means only that thousands of others probably have something similar in their portfolio. Beautiful as it is, as a professional photographer I can’t make my living with images like this. My goal in the field is to find unique images, subjects, conditions, and/or compositions.

A kinder word for cliché would be “classic.” We all have and love them. I find that leading workshops in places like Yosemite (or Antelope Canyon), many of my students come with the objective of getting classic images just like today’s, the beautiful images they’ve seen in books and calendars for years, and are prepared to be satisfied with just that. My goal as a workshop leader is to get my students these classic images they crave, but then to help them understand that the classics should be the starting point, not the ultimate goal.

With that thought in mind, I have to say that one of the most rewarding aspects of last week’s Northern Arizona workshop was our image review session. Don Smith and I co-lead eight to ten workshops each year—I assist Don in all of his workshops and he assists about half of mine (right now I do more workshops than Don, though he's rapidly catching up), and it’s approaching the point where the majority of our participants are repeat customers. In this workshop 11 of the 13 participants had been in at least one of our workshops. In the image review Don and I were thrilled to see the growth in our returning participants—without exception they all seem to “get” this concept of finding their own vision. They too captured the classics (clichés) like this, but some of the best images were uniquely their own.

So how does one consistently avoid clichés in a heavily photographed location like Antelope Canyon? It starts with an intimate familiarity that enables you to respond to whatever conditions arise, and a critical evaluation of your previous experience that helps you anticipate the opportunities and refine your approach. I don't know whether my next visit will be the time it happens for me, but I'm already planning the shots.

I was so surprised to hear you call this a "cliche" image - I've never seen anything like it. I love it.

a wonderful image...glorious light and textures. however, i get your point about taking cliché/classic pictures, and the craving for more than that, not only to make a living with photography, but also to satisfy my own creative standards.

Gary, great shot. You are masterful at light and shadows. Well done. I don't think anything at Antelope Canyon is cliche - it's very special place you captured here.

shoti from Everywhere in the, Philippines

that is a truly magnificent shot right there. thanks for sharing this beauty and the knowledge :)

Wow! This is absolutely amazing! Just breathtaking! Congratulations on the Spotlight! Well deserved. :))

WOW, congrats on the spotlight. wow

goodness this is amazing!! so vibrant, so robust and such rich color and splendid detail!! congrats on making the AM3 Spotlight!! bravo!!!

Fantastic shot of a wonderful place. I like very much the great lightind and detail. Spectacular.

Almost forgot... congrats on your spotlight ;)

BRAVO, Gary, for being in the Spotlight and it's no wonder!
I saw this Tuesday and sent a link to a friend who had just taken an 'album full of photos' out there. I wanted her to read your text, but your photo blew her away! :D
Then I forgot to leave a comment on your PERFECT TIMING, and on your teaching - thank you!

@Judy: Thank you, Judy. And thank you for spreading the word about my photo blog--there's nothing quite like an unsolicited endorsement.

Also, congratulations on your 50 years of marriage and good luck with your surgery--I'm sure all will be fine.

a classic upper antelope image. I've only been to lower and enjoyed the experience.

What an awesome shot...

This shot looks familiar, but I bet many shoot at this same sight. The layers of folds are amazing. Congratulations.

this is absolutely awesome, congrats on the spotlight

Congratulations on the spotlight, Gary!

Thank you everybody for your kind words. I'm sorry I don't have time to respond to each comment individually.

Stunning Capture! Great framing and composition! Thanks for sharing!

Such an awesome image! Excellent in every way.

Terrific shot, Gary. I find it hard to believe that I lived in Flagstaff for 6 years (1984-1990) and never got there; I drove by the entrance a number of times.