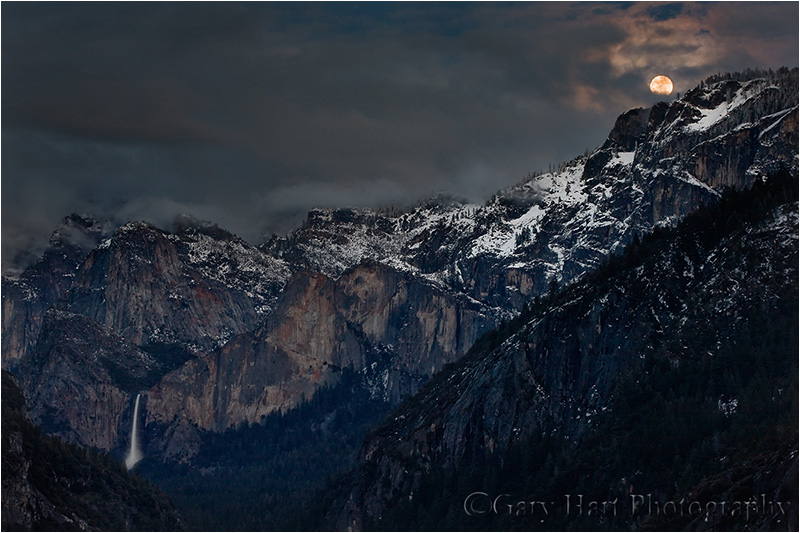 Subscribers to my (free) "Image of the Month" newsletter (contact me if you want to get on the list) got the scoop on this image a few days ago. I took it while leading a workshop in Yosemite early this month. In addition to a moonrise shoot, the workshop was supposed to feature moonlight and moonbow photography. But a late (for California) storm came through and turned those plans upside down. Instead we got snow, rain, and incredible skies. So while the photography was spectacular, things didn't materialize as expected. Sometimes photography just works out that way and you deal with it.

We were extremely fortunate that one of the few times we got any sky at all coincided perfectly with this moonrise. I'd figured out where we needed to be and waited with fingers crossed, hoping the clouds would hold off and the light would hold on. When the moon finally appeared it was truly breathtaking; we had about five minutes of shooting time before the foreground became too dark to photograph without blowing out the moon. But when the shooting was over we just stood and watched (this was one of those times when I feel like I'm watching the most beautiful thing happening on Earth at that moment) for another 20 minutes or so until the clouds took over.

Gary, as always, beautiful shot. Short of words to appreciate the shot and the effort you have put to take it. Your pictures are always inspiring for any amateur / newbie photographer. What I like on top of this is the effort you take to provide explanation of what it took to take this shot. Thank you for lovely pictures.

An incredible "painting of light" I love the mysterious feeling and the wonderful saturated colors that are brought out by the moonlight! Superb, as always!

In July I was able to watch the full moon from Glacier Point. This beautiful shot reminded me of that wonderful night in such a beautiful place although we had a clear sky and no dramatic clouds. Thanks for sharing.