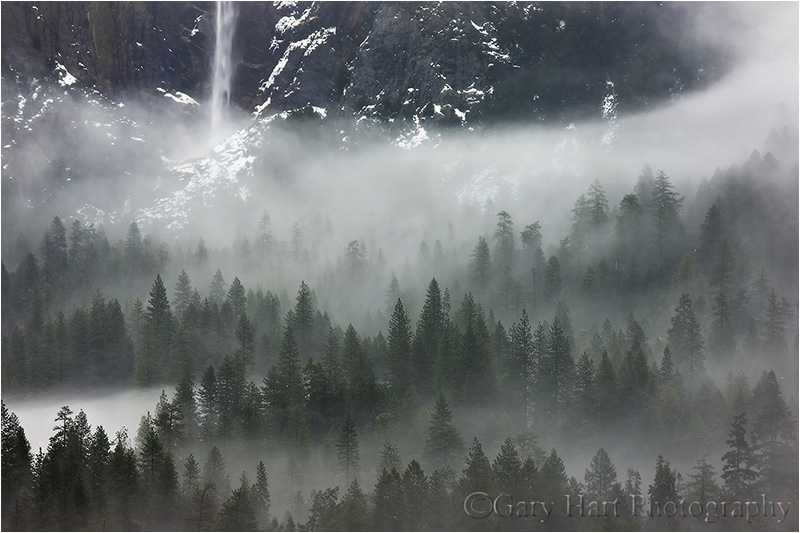 More of a mood shot than a breathtaking masterpiece, but an image I like nevertheless. I took this in a steady rain at Tunnel View last February. I like it because it gives me a real feel for what it's like to be out with my camera in "weather." More than anything this image underscores my assertion that people who head for cover when the weather gets uncomfortable miss some of nature's most rewarding moments.

This was the last day of one of my February workshops. With a mix of rain, snow, and clouds, the shooting had been good for the entire trip and everyone was happy with their images so far. So after three days of soggy shooting, when another storm set up camp in Yosemite Valley, I wouldn't have blamed anyone in the group for packing up early. But much to my delight, most decided to stay to the end, and we ended up spending a great day shooting in the rain. Rather than the classic Yosemite shots, we got tons of stuff like this: even light, swirling clouds, and low lying mist. Simply great photography.

I talk a lot about "cliché" images, so this might be a good opportunity to expand a bit on that. As a pro, I can't afford to settle for the composition everyone else shoots. But because Yosemite is one of the most photographed locations in the world, it's pretty hard to find something that's never been shot. My unique shot dilemma is compounded by the fact that many of my Yosemite trips are workshops, which of course requires me to share my locations with others. But the "find something different" mindset doesn't leave, and it's something I try to instill in my students.

A telephoto lens is a great antidote for clichés. At Tunnel View my default lens is my 70-200 because it allows me to pan slowly and pluck individual scenes from the grand vista everyone else sees. There at the Tunnel View vista point, when the conditions are great I alternate between shooting and pacing behind my group, reminding them not to forget their telephoto. Later in the workshop image review I find most of the wide Tunnel View images look about the same, but the telephoto shots are always different and often quite creative.

Wow. I think this is one of my very favorite shots. I find myself wishing for a mug of cocoa just looking at it.

beautiful image. So well composed and framed. Love the mist

Awesome Gary...Your advice is so valuable. It is so easy as an amateur to get overwhelmed by a large scene like Tunnel View. I took several shots here during this same time, and did not think about my telephoto; Guess I will have to go back :) Oh, darn!!!

that's a great one. nice.