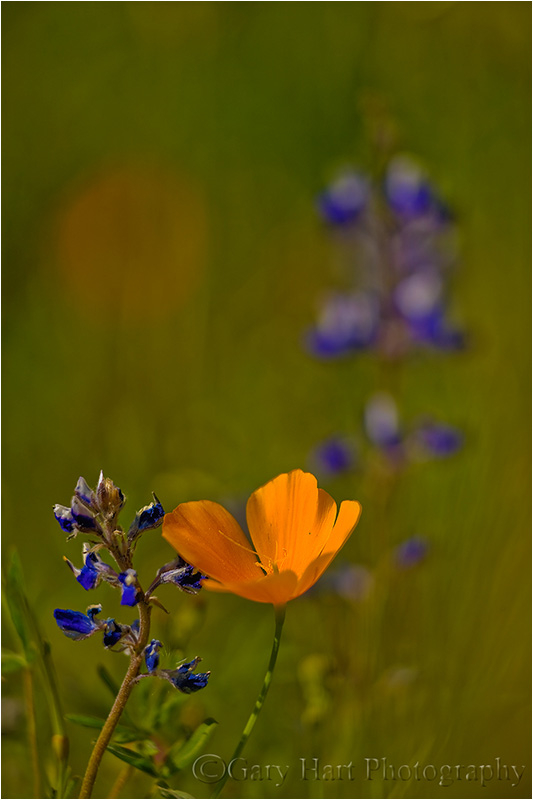 I took this last weekend in the Merced River Canyon, just outside Yosemite. I swear I wasn't thinking about Monet when I took it, but that's the first thing that popped into my mind when I got home and put the image up on my monitor. And for the record, there was absolutely zero Photoshop manipulation for this image--in other words, the background is entirely in-camera, and something any photographer with a DSLR, extension tube or macro lens, and a little understanding of depth of field can accomplish.

I was guiding a group of photographers on a day-trip to Yosemite, but with nothing but blue skies in the park, and a profusion of wildflowers in the Merced River Canyon, I decided to take a mid-afternoon detour to the canyon. We all found something to shoot--some opting for wider compositions that included the river and poppy covered hillsides, others opting for more intimate scenes like this. I put an extension tube on my 70-200 and went in search of flowers that I could isolate in my foreground.

Working with an extension tube severely limits your depth of field, so my general approach is to focus on the most important foreground element and find a background that blurs to appealing color and shape. Macro photographers often get so caught up in their foreground that they forget the background, but I think this image illustrates perfectly how even a completely out-of-focus background can be at least as important as the sharp foreground.

I've been thinking a lot lately about photography's future (and when I say photography, I'm only thinking of landscape photography because that's all I shoot), and the predictions that the proliferation of high resolution video means the imminent demise of still photography. The rationale is that when the inevitable day arrives when anyone with a video camera can pan a scene and simply extract the best frame, still photography will be rendered obsolete.

A panning video camera can capture an infinite number of points at a single focus point on the horizontal (left-right) plane, but it can't simultaneously capture an infinite number of focal points on the front-to-back plane. That means we still photographers who master the front-to-back world by managing depth of field and selective focus will still be able to create something unique. (I'm not saying video cameras aren't capable of this, it's just that attempting this with a video camera will neutralize its volume advantage.) So don't despair--just grab your camera and go play.

Beautiful shot. What you say is exactly right. I myself sometimes either focus too much on the foreground and get a not so good shot or focus on the background and loose a very good shot. Very nicely captured. The way you have captured it, it looks like there is a mirror providing a blurry reflection. Very nicely framed. Thanks for your writeup on your thoughts while taking this picture. It helps a lot for newbies like us.

@Uday: Thank you, Uday, I'm glad my words help. Speaking of words, I loved your description of my Golden Sunrise shot: "like the Sun is wrestling with the clouds to come out." Wish I'd have thought of it. :)

@Eleftheria: Thank you so much, Eleftheria. You are a wonderful photographer yourself and I predict great things for you.

Thanks Gary & a beautiful image to boot...I am interested in learning more about the extension tube you talk about... what is it, and how is it used, what does it do for a photograph, technically speaking?

@Tracy: Thanks, Tracy. Without getting too technical, extending any lens's focal length allows it to focus more closely. An extension tube is simply a tube you mount between the camera body and lens to extend the focal length. What you lose with an extension tube is light (the longer the focal length, the less light reaches the sensor for any given aperture opening--that's an optical constant) and the ability to focus to infinity. Extension tubes have electronic contacts that allow a lens to communicate with the camera exactly as it would if the lens connected directly to the camera as it normally does--in other words, you can still meter and autofocus when using an extension tube. Extension tubes come in varying lengths--the longer the tube, the closer you can focus (and the more light you lose, usually a stop or two). Virtually all of my equipment is Canon, but I make an exception with my extension tubes because there are no optics (it's just a metal tube with electronic contacts--you can put your finger through the opening); as long as the contacts work, the result will be identical regardless of the brand of tube. I use a set of 3 Kenko extension tubes--less than $200 for the set--that I've had for years. You can use one at a time, two, or all three (again the longer the extension the closer you can focus but the less light you'll have to work with). Hope this helps.

perfect title and i absolutely adore the colour mix in this image.