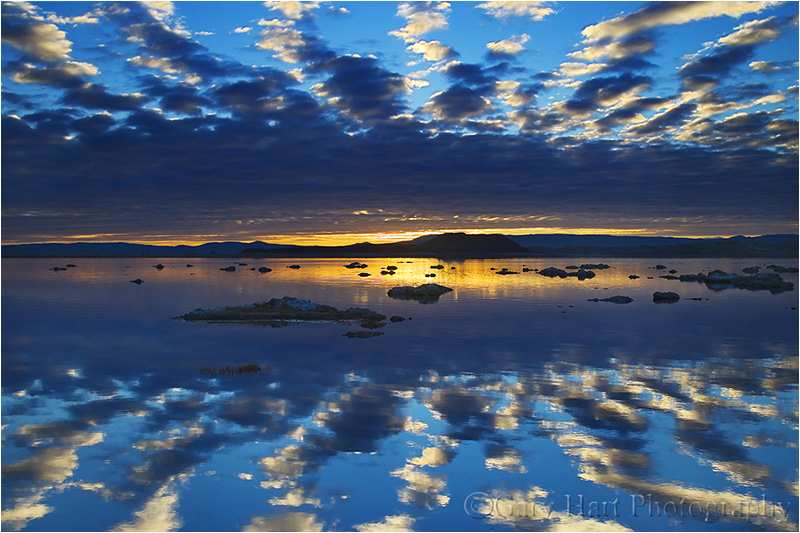 In my last post I mentioned the fall crowds at Mono Lake's South Tufa, and that I found another location on the lake to avoid the frenzy. Read on for the rest of the story....

The morning before taking this shot I'd watched two photographers nearly come to blows over a two foot square of prime lakeshore real estate ("Hey, you're in my shot!" "I've been standing here for 10 minutes!" "The hell you were, I just watched you walk up!" blah!, blah!, blah!...). So my brother, Jay, and I spent that afternoon driving the network of unmarked dirt roads circumnavigating the lake, finally shooting sunset at this isolated beach on the lake's north shore. But returning to the spot the next morning (in my pre-GPS days) required a convoluted reverse computation of odometer readings and a 1/2 mile trek through volcanic sand and swampy sludge (I ruined a pair of shoes), all in the pre-dawn darkness.

Of course we had no idea we'd get clouds like this--in fact the weather report had called for clear skies. Jay and I were hardened (okay, maybe just a little roughed up) by three days of shooting and our internal alarms were already set for sunrise on this, the last day of our trip. But arriving the night before and exhausted from their trip were (lightweight) photographer friends Don Smith, Mike Hall, and James Guillory. We met for dinner and Jay and I offered to share our location discovery with them the next morning, but they opted for sleep. Fortunately, Don and his entourage didn't miss the sunrise, appreciating it instead from the window of their motel room. (Okay, in all seriousness, given the weather report and our description of the location, I'd probably have opted for sleep too if I'd have just driven as hard as they had that day, but don't tell Don I said that.) They ended up getting fresh snow in the bristlecone pine forest and Jay and I kicked ourselves for leaving early. Sigh.

People sometimes question the credibility of this shot, but actually I did little in-camera or digital work to get this result. The shot itself is straightforward (no masterpiece of compositional inspiration), but it is nonetheless an image I'm quite proud of, simply for the effort it took finding it and getting there on that chilly October morning. The only filter I used was a graduated neutral density to reduce the contrast between the sky and water. I did nothing special in Photoshop and in fact didn't touch the saturation slider, so the color is all Mother Nature's handiwork.

I'm convinced that people, photographers even, sometimes forget how vivid color is in nature. That's the only explanation I have for the comments and questions I sometimes hear at gallery and art shows: "That's been photoshopped!"; "Is that the way it really looked?"; and my personal favorite, "Are those colors real?"

The fact is, the camera and the eye see the world differently--good photographers know this and use those differences to their advantage during capture (a discussion for a different day). To me there's no pleasure in taking a scene I photographed and manipulating it into something different in post-processing. On the other hand, I find great pleasure in manipulating my camera's limitations to my advantage.

The ephemeral quality of nature's beauty, and our senses' tendency to overload after prolonged exposure (why do you turn up the music each time a great song comes on, even though you never bother to turn it down when the last great song ends?), combine to dull our memories. The next time you're out in nature, make a conscious effort to study and mentally record the colors you see--a blue mountain sky or turquoise lake, the red of a sunset (the best color often comes long after everyone has gone inside), a field of orange and purple wildflowers.... These things aren't subtle and are frequently breathtaking--if anything the camera has difficulty doing them justice.

Side note: It looks like this image will be the cover of my book, though I'm still waiting for final word from the publisher. Stay tuned....

Beautiful colors and patterns. And, I wont tell Don you said that.

Beautiful, as always Gary. Thank you for your mini-lessons on this blog, they help keep me grounded. :)

Oh my! this is gorgeous!

What a wonderful shot, Gary... certainly one you can be proud of, if only for making the effort to be there for the opportunity to witness and record such a spectacular sight. It is frustrating to hear people doubt that nature can provide the vivid colors so often shown in sunrise/sunset pics. I know better, and, knowing how dry the air is up in the Mono area, I knew these colors were absolutely real... the intense sky blue on high, the whites in the clouds following the red phase of the sunrise, the blue-gray of the relatively opaque dense layer, and the extended width of reflected gold from that position with a higher look-angle. Just amazing... and oh, so very real. Clearly you were all left breathless... that is one incredibly glassy surface. Thanks for sharing your experience and this terrific picture with us!! Great fun!!

brilliant shot! yes, i can see why you are proud of it and agree 100% i really like the light and colour transition here and the reflection adds a certain "duality" to the photo - very nicely taken indeed!

Awesome image! Looks like a great place to shoot

I am really happy and proud of you for working on a book. You have amazing talent.

fantastic example of why we get up so early on a chilly day. Wonderful

This image has been featured in 2 Remix collections.