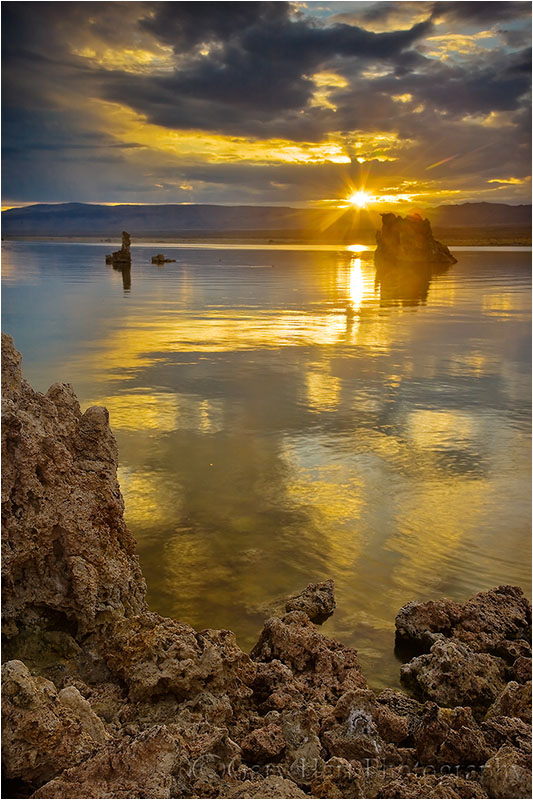 Among the things I like most about Mono Lake's South Tufa is that I can shoot sunrise in many directions without moving more than a few feet (and sometimes without changing my location at all). The morning captured this photo I started with silhouettes against the colorful sky to the east, then turned to photograph the sun's warm rays traveling down the high Sierra peaks to the west. When the sunlight reached the base of the mountains I turned eastward again and captured this shot of the sun rising above the lake, before turning once more, this time to northward, to catch the warm light on the tufa towers. I'm exhausted just talking about it.

Seriously, Mono Lake is a photographer's paradise. Regrettably that's no secret, and on many fall mornings (with so many photographers in Lee Vining to photograph the Eastern Sierra fall color) you can spend as much time jockeying for position as you do actually taking pictures. I try to get my groups out there at least 45 minutes before sunrise so we can at least get the pick of the prime spots. I also include a second sunrise shoot at a different location where we have the entire area to ourselves. But if you only have one day at Mono Lake and you've never been there before, I think this image makes it clear why you have to shoot South Tufa.

Stunning photo. Awesome and captured with great skill. Thanks for sharing.

Gary fantastic and beautiful. I love the color on the foreground and great composition! It was good to see you in Big Sur. Keep up the great work!