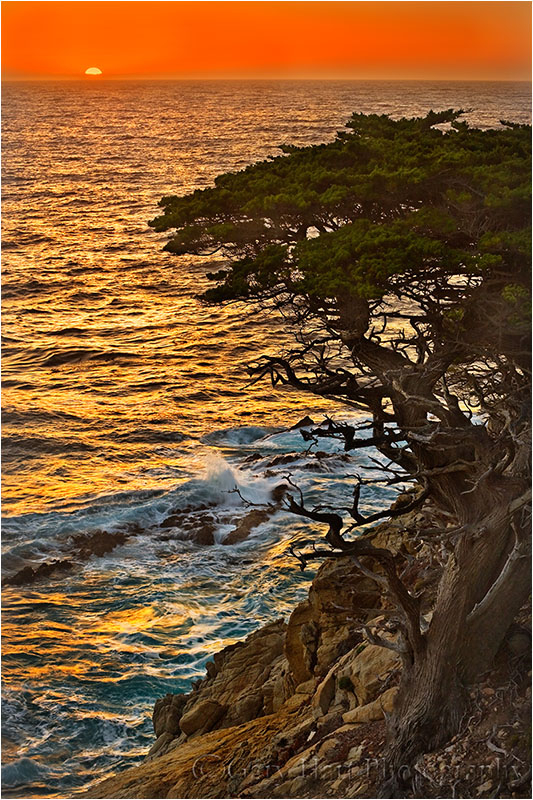 This Big Sur sunset is from last Thursday evening, the final shoot of the Big Sur workshop I co-led with Don Smith. After several days of interesting skies, the workshop ended flat and cloudless. One of the great advantages to photographing sunset on the West Coast is the potential to capture the sun being absorbed by the western horizon. But a setting sun alone isn’t usually enough to redeem a boring sky, so, demoting the sky to background status I set out in search of an interesting foreground.

Sunset was about 30 minutes away when I found this weathered cypress clinging to the rocks above the crashing surf. Rather than continue wandering in search of other possibilities, I used the time remaining to familiarize myself with this scene I knew would work (a bird in the hand…). I set up my tripod and experimented with compositions, studied the behavior of the waves, and tried to anticipate the exact location of the sun’s ultimate exit.

When the sunset began in earnest I was ready with several compositions and my 3-stop reverse graduated neutral density filter (“reverse” because I can position its darkest zone at the horizon, where the sky is brightest). Having already visualized compositions freed my mind to concentrate on the surf and time my exposures to match each wave’s crescendo. As the sun dropped I “worked” the scene, switching between close and wide, vertical and horizontal, and different wave behaviors.

I talk a lot about "working the scene," and for whatever reason this concept raised a lot of questions in last week’s workshop. I love discussions like this because they take my brain places it wouldn’t otherwise venture. The conversation got me thinking about digital photography, and how the approach to capture differs from film photography.

When comparing digital and film, the first difference usually mentioned is the instant feedback digital provides. Of course this difference is huge, but I think of equal significance is that with digital, your investment is fixed when you purchase the camera (I realize I’m simplifying here, but you get the point). There is no cost associated with each shot, so it's easy to conclude that the more images, the greater the potential return on the investment. Film shooters, on the other hand, have a relatively small initial outlay. Instead the bulk of their investment comes each time they squeeze their shutter (each click costs money)—an unsuccessful shot is a failed investment.

Per-image film and processing costs forced film photographers to be selective with each capture, to plan, think, and execute carefully. Many digital photographers, especially those who came to serious photography in the digital era, often take hundreds (and even thousands!) of shots in a day with little or no thought. I suggest that this approach, while perhaps rendering an occasional success, ultimately produces mediocre photographers.

I'm not advocating against digital—the immediate feedback (among other things) digital provides makes it impossible for me to imagine returning to film. But I won't forego my film approach to photography. Treating each shot as an investment, and using the information provided by digital’s immediate feedback, is the surest recipe for growth as a photographer.

Could I have gotten today's shot with film? Perhaps, but not without a bit of luck, as my prime concern would have been getting the exposure right. Shooting digitally removed a major distraction by allowing me to know immediately that my exposure was okay. But I would have been quite lucky to capture it digitally if I had simply fired off frames without a plan. So while film may in fact be dead (or at least on the critical list), digital photographers would be well served to slow down and value each frame as film shooters have for over a century.

Thanks for sharing this topic Gary- I am susceptible to the "digital" way of thinking, and sometimes get lucky--But more often than not, I end up with 100 crappy shots of the same thing!
I think that for me at least, in this fast paced world & time we live in, I "carry over" that feeling of rushing into my photography. It is always a good reminder for me to slow down & plan what I am trying to do--Or even to first think about what is is I want to do...
I am reminded of something you said when you gave your presentation to our camera club: "Create, rather than react"
Having said all that, this is one of your most beautiful photographs! It is simple, but in no way ordinary.
I just love it.

@Tracy: Digital cameras are ideally suited to our instant world, so it takes a real conscious effort to slow down and think rather than see and react. But the more you do it, the better your results will be. I should add that this slowing down doesn't just apply in the field--part of your growth as a photographer involves taking the time to evaluate and self-critique at home. What worked and what didn't? How should I do it different next time?

this one took my breath away!

I like what you had to say, all true, careful, real. I think you have a good way of thinking, and I like the results of your shot, by planning, executing -- immediate feedback is nice, but your background and your experience is what helped you. Surely not just reacting...

@LauraS: You're right, Laura, it's all about anticipating the shot. Of course you can't get so focused on the shot you're going for that you miss the unexpected, so it's sometimes a real balancing act.

Hi Gary, there is so much to like about this image: the use of a foreground element, in this case the cypress tree, to draw one into the frame, the warmth of the water and the placement of the "melting" sun. All the elements were carefully planned so the lines and shapes worked in harmony to take the viewer's eye through the frame. But more than that, this image illustrates how a professional such as yourself takes a situation of a blank sky and still makes an incredible image! This was the result of obvious foresight and careful planning. The execution, perhaps in this instance, was the easy part. Ansel Adams, as I know you are aware, talked of "seeing the finished image in his mind's eye." I'm sure you saw this finished image before you captured it, perfectly demonstrating both our beliefs that the photograph is created by the photographer; cameras, lenses, filters, etc., are just tools to carry out our vision. Well done my friend!

WOW! Gary, I have driven this coast often and you captured the thrill of the sunset on the water with the most important image of all....the cypress.. I love it.

Hi Gary a amazing image, what you wrote is really great, as time moves foward with my photograhy I am learning and want to see the final image in my mind before the print. I have lately been reading a lot of Ansel Adams books. And I am sure my future work will be rewarding from reading his teachings, and I will be guided by your teachings in the upcoming workshop in two weeks. Thank you Jeff

Gary thanks for the insight!! Beautiful image and processing! Take care.

stunning! thanks for sharing!

A composition much in my taste. Harmonious and with a fine sense of depth. lovely golden reflections and a appealing atmosphere.
Well done!