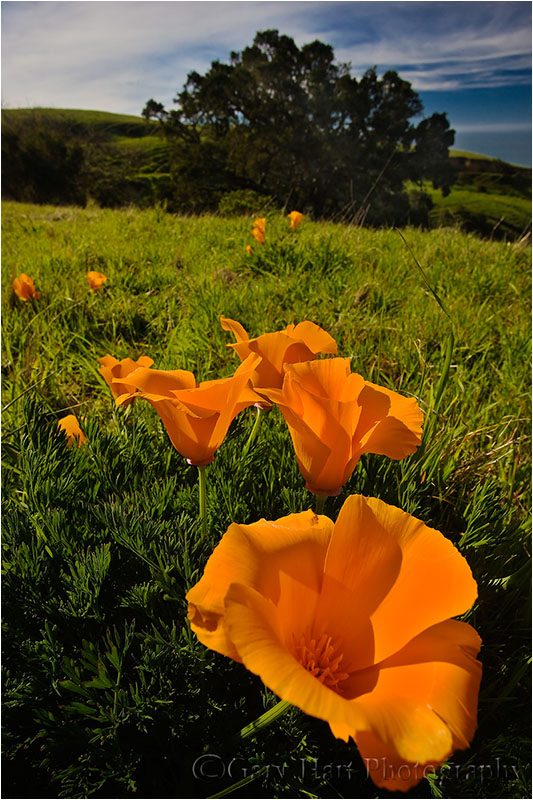 Next week I'm off to California's central coast to assist fellow Aminus3 blogger Don Smith, http://donsmithphotography.aminus3.com/, with his Big Sur Spring photo workshop. If you'll forgive a brief plug, Don and I have been collaborating on photo workshops for several years now--Don assists many of my Yosemite, Eastern Sierra, and Death Valley workshops, while I assist Don with most of his Big Sur, Mendocino coast, and Northern Arizona workshops. Not only do we make a great team, I'm afraid Don and I have way more fun on these trips than workshop leaders (not to mention mature adults) are supposed to have.

Today's image I captured during Don's workshop last March. We found these poppies in a field near the south end of Old Coast Road--some of the group wanted to continue on and shoot more along the coast, while others wanted to stay and shoot the poppies. Always a sucker for poppies, I volunteered to stay back with the poppy group and we ended up shooting for over two hours.

This shot illustrates an important concept I try to convey to my students: The front-to-back component of your scene is at least as important as the lateral (left-to-right) component. When I found this group of poppies I moved around to position the oak tree in the background, choosing an aperture and focus point that made it recognizable but soft enough not to compete with the foreground poppies.

One other point: There's a lot of fear-mongering out there about diffraction introduced by small apertures (f-stops). While this diffraction is real and something to be aware of, as this image illustrates, sharp images are still possible at small apertures (f16 in this case) and you should never forego what you determine to be your shot's best aperture for fear of introducing diffraction. That said, you still should try to avoid an aperture smaller than necessary--the rule is to determine exactly the aperture that best serves your scene and go with it. (Of course this often requires a tripod, but that's a rant for a different day.)

Beautiful Gary- Your scenes never disappoint...Thank you for sharing your knowledge & thoughts here with us. The subject of diffraction has been popping up a lot lately (not an intentional pun-but I'll go with it) and it's nice to get your take on it...

@Tracy: Thanks, Tracy. There should be no secrets in photography--spread the word. :)

Lovely! One question: Why the soft background at f16? I would have thought this would give total DOF sharpness - or is it due to the point you chose to focus at?

@David Hanson: Thanks, David. I didn't get full depth of field because I was so close to the poppies (just a couple of inches). Also, I believe I was using an extension tube, which further reduced my DOF.