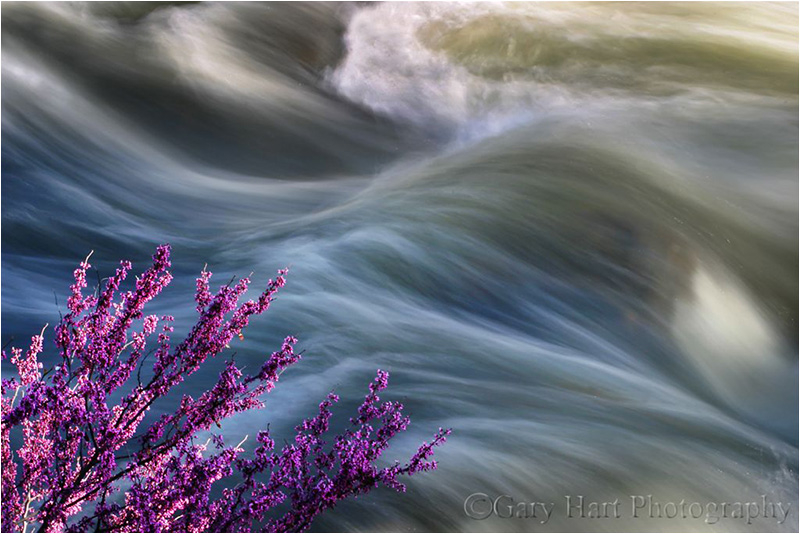 This one has been around for awhile but it's still one of my favorites. I chose it because it's on the route I take to and from Yosemite (Highway 140 through the Merced River Canyon), a route I've found myself on fairly frequently lately.

In March or April this stretch of 140 just west of Yosemite is lined with blooming redbud shrubs just like this, as well as an abundance of poppies and other wildflowers--I try not to miss the bloom and in fact timed my April workshop to coincide. On my drive home from Yosemite yesterday I scanned the roadside for any signs of the impending bloom. I found no redbud, but was surprised to see lots of poppies blooming on the slopes at the west end of the canyon. This is early, even for California, and I hope it bodes well for a nice wildflower bloom this spring.

This redbud image is a 3/4 second exposure on a windless afternoon. I'm frequently asked what shutter speed is required to blur water. Unfortunately this question has no simple answer, depending rather on several factors such as focal length, distance from the water, and the speed of the water.

Ah, the rush and swirl of fast water coupled with an excellent composition make for a delightful image, Gary.

Great shot! I love the composition and the swirling water. The colour is great too!

excellent work ! love the composition, the movement and the colours !

This is a wonderful photo, the movement of the water is so beautifully captured just as well as the lovely flower in foreground... simply great!

I've had a great time clicking through your blog. The photos are lovely and your comments about them are quite helpful to a beginner like myself. Thanks!

a very lovely time lapse shot -- the pink flowering shrub in front makes this shot for me!! just splendid!