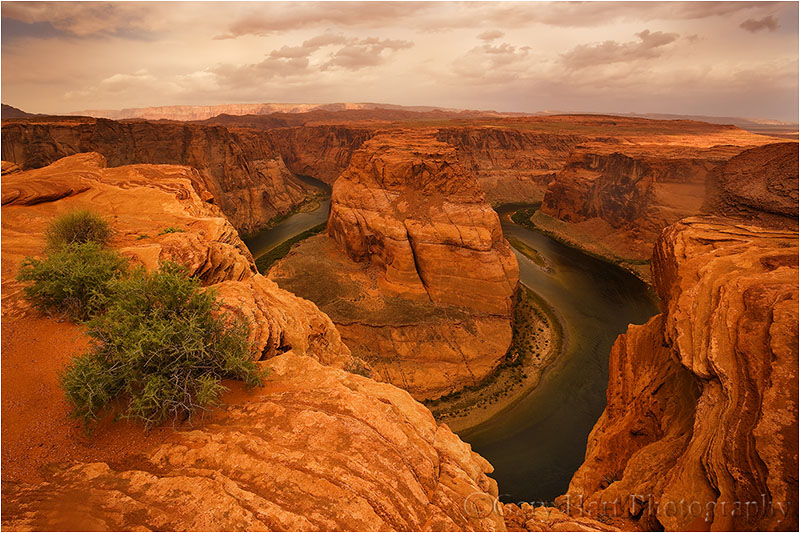 I've been in Yosemite since last Thursday and unfortunately my blog hasn't received any attention in my absence. Since I just walked in the door I don't have time to write a lot now, but thought I'd at least post a new image.

This is another image I captured on the trip to Northern Arizona last May. I realize this is somewhat of a cliche' shot, but like most cliche' shots, it became that way for a reason. The only other thing of note here is that this vista is not for the faint of heart. As steep as the drop looks in two dimensions, believe me when I tell you it looks even steeper in three. But unlike the popular vistas at our National Parks, where railings and warning signs proliferate, whoever oversees Horseshoe Bend assumes you're smart enough not to walk over the edge. (Fortunately, I passed the test.)

BTW, if you've ever been to Horseshoe Bend (or Antelope Canyon, which is just down the road) you know that the rock is really that color.

cliche' or not, it is a gorgeous shot. Also it was nice to see you at work in Yosemite- soggy though it was! My best image from the weekend was from the drive up Hwy 140 !

@Tracy: Thanks, Tracy. Yeah, it was good seeing you too. We actually had a great day on Sunday, despite the rain. I was so thrilled that most of my group hung in there with me in the soggy conditions. We ended up with some fabulous stuff. I'm not sure where on 140 you stopped, but I found a little rain-filled waterfall on 140, just down the hill from Midpines. I actually performed a spontaneous u-turn and went back to shoot it--I haven't looked at the images yet, but I sure had fun.

I discover your blog and really photos are magnificent