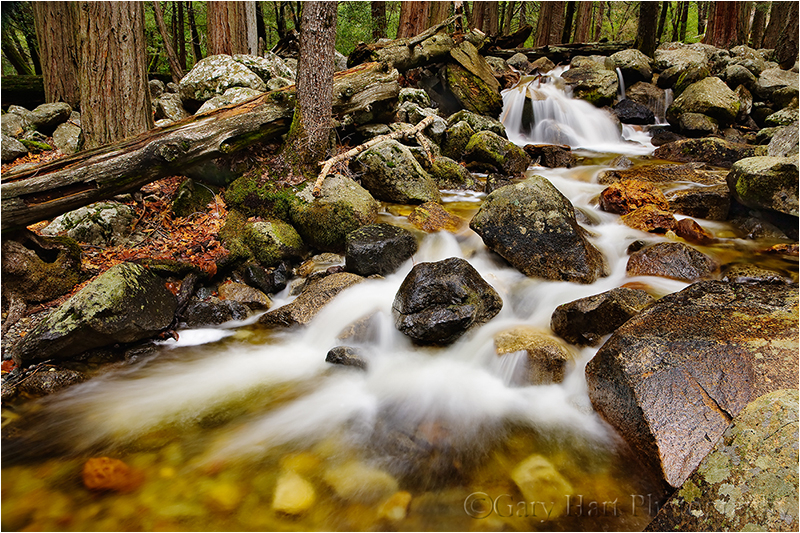 How cool am I? I'm sitting at Starbucks, sipping a mocha, connected to my iPod (Counting Crows, Pat Metheny), checking my BlackBerry, and pounding on my MacBook. Probably more caricature than cool. Sigh. But anyway….

This scene along Bridalveil Creek I found during last week's workshop. I love taking my workshop groups here, partly for their reaction, and partly to see during our image review session the variety of images they found. We’ll spend a couple of hours poking among the rocks and rapids, and usually return at least once because once everyone gets in “the zone” here they don’t want to leave.

There are three branches to the creek here at the base of Bridalveil Fall, so it’s not long before my group has completely spread out. It's hard to keep track of everyone so I generally spend my time wandering about to see if anyone needs any guidance. But as I do I carry my camera and will shoot when something moves me. Usually I prefer my 70-200 here, which allows me to isolate individual rocks and rapids. But when this scene presented itself I switched to my 24-105 to get a wider view.

As with most scenes in nature, it's up to the photographer to organize the elements into a coherent composition. This scene is first about visual movement, as the creek flows into the top of the frame and out the bottom. But the variety of elements complicates the composition, creating real potential for distraction. So I tried to use the elements of the scene to create a virtual frame that guides the viewer's eye.

I composed the trees at the top and left side of the image, partly to set context (forest setting), but mostly to hold the viewer's eye in place; the rocks lining the creek make a strong frame on the right. The bottom of the image is held by the rocky creek bed, where I felt I needed more openness (something less heavy than rocks or trees) to allow the viewer's eye to flow with the water.

excellent composition and exposure! the light is very well balanced across the frame, colours are wonderful too!