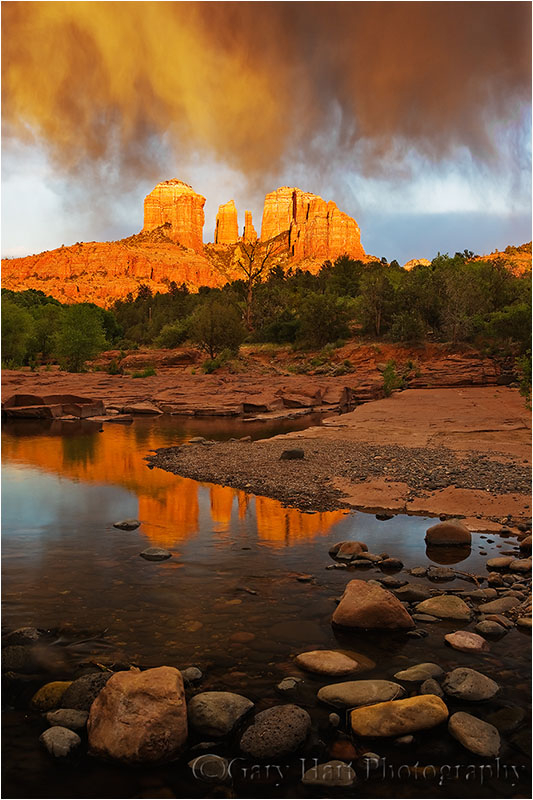 And now for something completely different....

Last May three photographer friends (Don Smith, Mike Hall, and my brother, Jay) and I embarked on a road trip to scout Northern Arizona for Don's upcoming Northern Arizona photo workshop (http://www.donsmithphotography.com). In addition to a fantastic time, we had some superb photography. The best day was also our toughest. We started with a beautiful Grand Canyon sunrise shoot, then drove to Page where we photographed Horseshoe Bend and Upper Antelope Canyon as a storm approached. Tired but still not satisfied, we hightailed it to Sedona for sunset.

The reflections were crisp and Cathedral Rock was already starting to warm when we arrived at Sedona’s Red Rock Crossing. True to form, the four of us piled out of the car and went our separate ways in search of our own vision. As I moved along the shore I soon realized the best foreground options required me to stand in the creek (Oak Creek), so I rolled up my pants sloshed in. Oblivious to the cold, I found a number of compositions that excited me, and I worked them in my usual fashion, tight/wide, horizontal/vertical, and playing with depth of field and my polarizer.

The light was fantastic and getting better by the minute when this rain cloud scooted into the scene, depositing a few large drops but mostly evaporating before reaching the ground. I was grateful that I’d already found some compositions that worked for me, so rather than explore further while this amazing display was underway, I returned to what I knew and shot everything all over again. When the show was over the four of us met at the car and shared our similar excitement with what we’d just witnessed.

While some would call conditions like this dumb luck, I’ll take some comfort from the words of Louis Pasteur, who told us “Chance favors the prepared mind.” In other words, while Mother Nature did the heavy lifting, I think the four of us deserve some credit for being the only ones out there.

beautiful photo I love the colors and reflections great job

Great shot. Colours are splendid, composition too. Love it !

superb composition, and the light is so beautiful

fantastic photo! excellent composition indeed, incorporating the reflection was a great idea! the light is brilliant and the level of sharpness and clarity is auperb as well!

Very beautiful photgraph I like the colors and the reflections

Like the warm tones n the reflections.Good job Gary ;-))