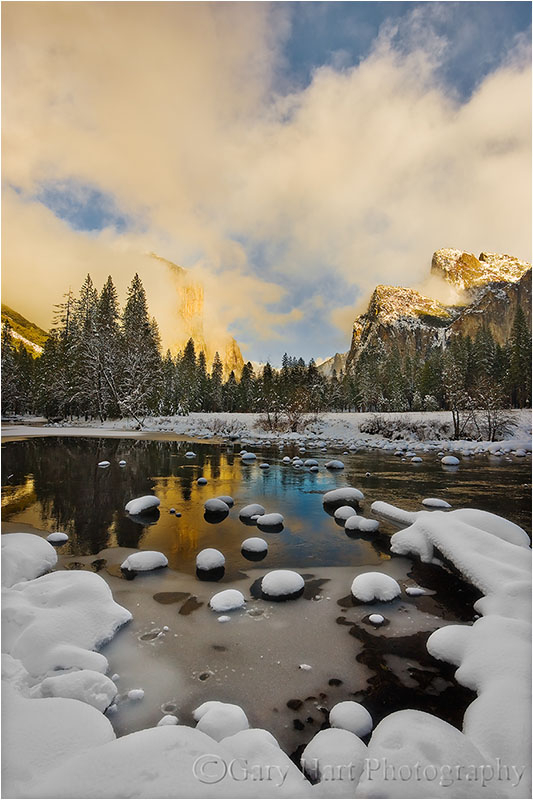 There's nothing quite like Yosemite with a fresh blanket of snow. But because Yosemite Valley is only 4,000 feet above sea level, it often gets rain as the rest of the Sierra gets snow. And when snow does fall, the relative warmth in Yosemite Valley starts the melting process that robs the scene of its freshness almost as soon as the snow stops falling. So capturing a scene like this requires being in the park during the storm--if you wait until hearing it snowed in Yosemite, you'll be too late.

Last December when I learned an incoming cold winter storm was expected to deposit snow in Yosemite Valley, I changed my plans and headed to the park. I arrived in the evening, just as the snow started. The next morning I woke to falling snow and clouds that obscured everything but the closest trees. It wasn't until mid-afternoon that the snowfall abated and I was able to get to work.

I found this shot at Valley View, a location that's probably second only to Tunnel View for "cliché" Yosemite shots. Because there are so many images from Valley View, I usually avoid shooting here when I'm by myself. But it's such a beautiful spot that I always check it out as I drive by. And on this afternoon I couldn't resist.

In this case my eyes went first to the beautiful background and I moved around in search of a foreground to support the scene. I composed the frame vertically to lead the eye from front to back, centering the horizon to create a mirror relationship between the foreground snow, ice, and water and the background sky and clouds.

Nature is full of seemingly unrelated elements like this that can be connected by careful arrangement in the frame. Finding and revealing these relationships is the difference between taking snapshots and creating art.

Rosso from Luserna s.Giovanni (To), Italy

this is really a wonderful composition Congratulations!

Beautiful. Love the light and reflections.

Just wanted to tell you that I've been loving your blog! I've been checking it out every day... I love your photos! :-)

@Kirstin Hill: Thanks, Kirstin, it's good to hear from you. And it's nice to know that someone I know is watching.... :)

Thank you everyone for your comments.

the lower half of this image is my favourite. The snow-capped stones in the water is beautiful.

totally brilliant -- i am glad i found your blog from visiting the community page today!! welcome to Aminus3!! and congrats on the spotlight once again -- your work is amazingly beautiful!