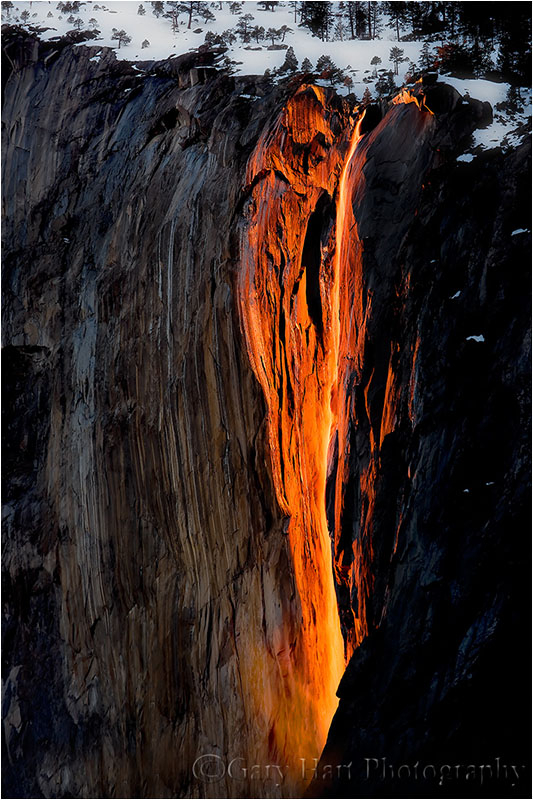 Most of the world has never heard of Horsetail Fall. But to Yosemite regulars Horsetail Fall's backlit plunge from El Capitan has become a February phenomenon, attracting photographers from around the world. Park rangers now set up traffic control to manage the swarm of photographers wanting to capture this spectacle, and each year the crowds seem to swell. Fortunately the scene is up, above the heads of the teeming swarm, so hundreds of people can shoot side-by-side. And there are still a few vantage points that haven't been discovered by the masses.

Given all this attention, it’s amusing that 90% of the year Horsetail Fall is dry. And even when it does flow it's virtually anonymous—if you didn’t know exactly where to look, you’d never find it. But for those few weeks in February, when the sunset conditions are just right, it lights up like this. If you’ve ever seen it you know the effect isn’t subtle. At its peak it's like molten lava flowing down the face of El Capitan.

A common misconception is that Horsetail’s firefall phenomenon can only be photographed in late February. But I took this on February 9. Another myth I’ve seen perpetuated by pros who should know better is that it's extremely rare (I’ve actually read that "it only happens once every 10 years"). The reality is that Horsetail Fall can light up like this many times each winter--I photographed it on consecutive nights last year, then returned the following week and photographed it again. But while I haven’t done the math, I’d guess that it doesn’t happen many more times than it does happen. That’s because there's no guarantee of water, and light like this requires a clear western horizon right at sunset, definitely not a given for Yosemite in February.

Horsetail can be a real tease too—you can watch the sunset shadow creep across El Capitan, hold your breath as the fall warms, only to see the light snuffed just as the color starts to intensify, obscured by haze or an unseen cloud on the western horizon. But when it does happen it's greeted with cheers that rival a Super Bowl touchdown, and clicking shutters to match. Because I've photographed Horsetail many times, from multiple locations, I no longer get caught in the frenzy. Instead I live vicariously watching the reaction of others seeing it for the first time.

Many photographers have looked at this image and assumed I’ve scaled Yosemite's snowy granite walls to find an elevated vantage point, but I swear my feet were firmly planted on the valley floor. I photographed this across the river and a bit upstream from the “popular” location detailed in Michael Frye’s (essential) “Photographer’s Guide to Yosemite.” (Michael’s book should be the model for all landscape photography location guides. But I digress….) Though this spot is a little farther away, I like it because it offers more compositional options. The apparent eye-level perspective is an illusion created by the steep incline atop El Capitan.

Truly a fabulous shot, and again, wonderful description of what you are doing and how. Thanks.

Gary, A great image. I shared this spot with you and our workshop last year. Yesterday I was there and there was not enough clearing in the west. Disappointing but it makes the times that it does happen all the more special.

@Paul Francis: Thanks, Paul. Yeah, I like taking my groups here because there's more variety in the compositions. And if you turn and look behind you, there's a shot Yosemite Falls and another of Sentinel Rock. This year I took my group to the picnic area beneath Horsetail because there's a bit more room and Yosemite has just become overrun with Horsetail shooters. We got there at 3:30 Thursday afternoon (for a 5:40 sunset) and got the last spaces in the lot. It was worth the wait, though, because Horsetail lit up beautifully for us. We ran into photographers all weekend who had come to the park solely to shoot Horsetail, but Thursday was the only day it happened. I hope they appreciated the rest of the park because the shooting was fabulous all weekend (we had a great time playing in the rain yesterday). In general 2009 hasn't been a good year for Horsetail because of all the rain and snow. But of course we definitely need the water, so no complaints.

Absolutely breathtaking! Thank you for sharing all those amazing images with us! Love them all! :)))

@Magda: Thank you, Magda, for all your comments.

one of those images I want to get one day. You've inspired me once again with this shot. Fabulous.

@Bill Jennings: Thanks, Bill. While this one is from last year, my February workshop group had the good fortune of capturing Horsetail on what I believe was the only evening it lit up this year.

Perseverance IS worth posting more than nature's wonders, or equally worth it.
Congratulations!