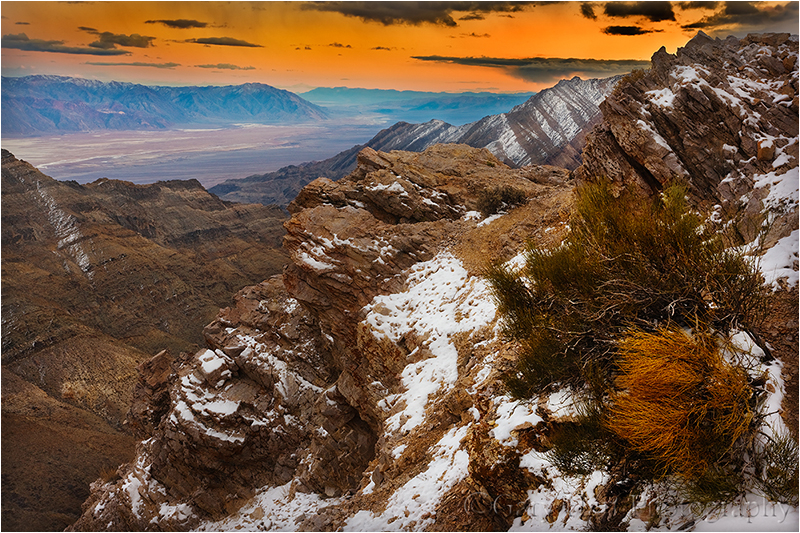 Aguereberry Point may offer Death Valley’s most photogenic panorama. It’s certainly the most underrated. Dante’s View is more popular, and may be a better choice for tourists who like an unobstructed view (and paved roads). But great landscape photos usually require a foreground, and that’s what distinguishes Aguereberry Point from Dante’s View.

I got my workshop group up there about an hour and a half before sunset. It was cold, already in the thirties, but fortunately the wind was light. Above us were dramatic clouds in all directions, with enough breaks to promise great sunset color. The light dusting of snow that had fallen the night before really highlighted the texture in the surrounding terrain.

As I wandered about checking on my group I was surprised at first to hear that some were having a difficult time making compositions, but I shouldn’t have been—first time Aguereberry photographers often experience visual overload. The view is more than 180 degrees, and the raised promontory from which we photograph this vista offers a plethora of colorful shrubs and textured red rock. Separating the foreground and background is a massive precipice of layered sediment. The scene is further complicated by the seemingly random angles at which all these elements converge in the two-dimensional plane of the viewfinder.

Successful photographs here (as with any location) require organizing these diverse elements into a coherent composition. The key is understanding that, despite all experience to the contrary, nature is inherently organized. Disorder is manmade (or man-perceived). Everything in the natural world what it is through the natural laws that formed and bind our universe.

So in a scene like this I pick out elements moving from back to front (or front to back)—colorful sky, dramatic clouds, striking rock formations, a shrub that stands out—and move about until these elements align in a manner that pleases me. Failure is simply a limitation in my ability to see the world; success is the reason I’m a photographer.

beautiful colours and tones in this image; great work

@missparis: missparis, I regret that I don't speak French, so I'm unable to answer your question.

Thanks everyone for your comments.

The colours and lighting are amazing! Beautiful composition